Is it Possible to Own Dinosaur Fossils? Leonardo DiCaprio's Interest in Buying 150-Million-Year-Old Bones Upsets Researchers

Flashy auctions are held to sell off these archaeological pieces and the rich and famous can easily buy one of these pieces at exorbitant amounts. 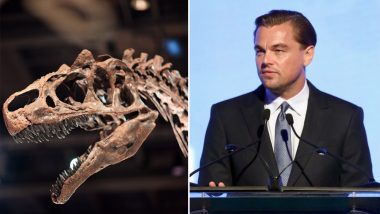 The rich and wealthy have luxurious choices, something which commoners wouldn't even possibly know about owning. So as Leonardo Dicaprio demands buying dinosaur fossils, the scientists are not impressed. DiCaprio expressed an interest in buying 150-million-year-old skeletons of an Allosaurus mother and baby from Wyoming. This piece of 'art' costs about $2.5 million and took more than two years to excavate. The Hollywood actor is known for owning fascinating pieces of art but buying dinosaur bones has raised a lot of questions. One among them, is it so easy to buy dinosaur fossils for anyone? Name a Dinosaur After Yourself but you Need £1,000,000.

Leonardo DiCaprio bought a 67 million-year-old head of a Tyrannosaurus bataar, a cousin of T-Rex dinosaur in the year 2007 through an auction. He outbid Nicolas Cage who had obtained the skull at $276,000 from a commercial palaeontologist. This skull was apparently stolen but the two were unaware they were biding on a stolen piece of archaeology. According to reports, DiCaprio also sold a skull of a Mosasaur, a giant marine reptile that became extinct 65 million years ago, to Russell Crowe. So is The Revenant star a private collector of such fossils? Ichthyosaur, The 145-Million-Year-Old Fossil Uncovered From Kutch Becomes Subject of Debate Between Students and Delhi Scientists.

Flashy auctions are held to sell off these archaeological pieces and the rich and famous can easily buy one of these pieces at exorbitant amounts. Private fossil industry is rising and palaeontologists are not happy. "Fossils are not like ordinary art objects.  [They are] a unique and irreplaceable piece of evidence of earth’s past, and in that sense it’s important to all of us," according to the president of the Society for Vertebrate Paleontology. Those who privately carry out the excavations find bidders and charge enough money to fund their own digging cost and further expeditions. There are researchers who work hard every day to piece together these historical pieces of evidence and study more about the ancient past. Private auctions become a huge hurdle in studying the earliest life forms further.

(The above story first appeared on LatestLY on Dec 17, 2018 02:04 PM IST. For more news and updates on politics, world, sports, entertainment and lifestyle, log on to our website latestly.com).