Raya and the Last Dragon Trailer: Awkwafina and Kelly Marie Tran Are on a Mission to Restore Peace (Watch Video)

Directed by Don Hall and Carlos López Estrada and co-directors Paul Briggs and John Ripa, the film the movie was set to hit the theatres on November 25, 2020. 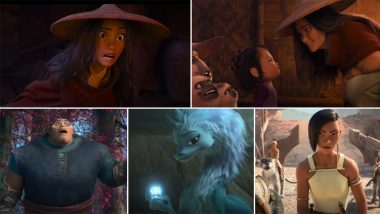 Who doesn't love an animated Disney film with a strong protagonist? The makers of films like Moana and Frozen already had us impressed with these stories but surprisingly they have yet another gem ready for us. Their next project titled Raya and the Last Dragon is all about a female protagonist who is ready to save the world! That too with a help of a dragon. The two powerful characters are voiced by Kelly Marie Tran (Raya) and Awkwafina (The Last Dragon) and we finally get to see a glimpse of what the film will be about. Raya and the Last Dragon Trailer to Debut Soon, First Poster of Awkwafina and Kelly Marie Tran's Animated Film Looks Great.

The makers shared the trailer of the film today and just like any other Disney movie, the trailer looks amazing. We see Raya setting on a mission to save the world from another war. She finds a few people while on her journey who are powerful just like her and who are willing to help her achieve her goals. Let us also tell you that this team has a small baby girl showing off some crazy fight moves also. Interesting, right! Raya's cute little armadillo that made a debut during the teaser of the film is also seen helping her during this journey. We also finally get to see the dragon and it is one of the most adorable characters, you will see. We know a dragon is supposed to be fierce but we are calling it adorable for a reason and you will see why right about now! Check out the trailer below.

The official synopsis of Raya and the Last Dragon reads, "Long ago, in the fantasy world of Kumandra, humans and dragons lived together in harmony. But when an evil force threatened the land, the dragons sacrificed themselves to save humanity. Now, 500 years later, that same evil has returned and it’s up to a lone warrior, Raya, to track down the legendary last dragon to restore the fractured land and its divided people. However, along her journey, she’ll learn that it’ll take more than a dragon to save the world—it’s going to take trust and teamwork as well." Raya and the Last Dragon Teaser Trailer: Kelly Marie Tran's Pet Armadillo Steals the Show.

Directed by Don Hall and Carlos López Estrada and co-directors Paul Briggs and John Ripa, the film the movie was set to hit the theatres on November 25, 2020. The makers then finally aimed for an early 2021 release and now are finally ready for the film to premiere in theatres on March 5. The film will also be available for the audience to watch on Disney+ online.

(The above story first appeared on LatestLY on Jan 27, 2021 02:56 PM IST. For more news and updates on politics, world, sports, entertainment and lifestyle, log on to our website latestly.com).