Scarlett Johansson's Black Widow to Premiere on Disney+ ? David Harbour Has This to Say About It

Do you think Marvel's Black Widow should release directly on Disney+ after it got postponed amid coronavirus outbreak? 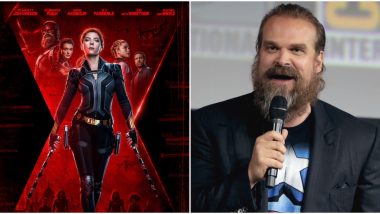 While the governments of different countries get ready to tackle the recession that would follow the coronavirus pandemic, the entertainment industry will also incur some big damages. With movie theatres shut, production houses are delaying the film releases and we shouldn't expect any movie to hit the screens until June this year. While some have already announced new release dates of their productions, others like, Black Widow is yet to book a new slot and there are rumours that it may premiere directly on Disney+.

As per reports in We Got This Covered, industry whispers are all about Scarlett Johansson's next hitting the small screens directly. Disney is already thinking about having its premiere on its newly launched digital platform, Disney+, however, it won't be a wise option for them monetarily. Meanwhile, David Harbour, who plays Alexei Shostakov/Red Guardian is all game for this not-so-brilliant idea. In his recent Instagram Live chat, the actor revealed his thoughts on this possibility and how he's okay with having a digital premiere for it.

“I’m very much looking forward to being in Black Widow if we ever are able to release that movie. I would love to be able to watch that movie too – y’know I have not seen that movie. I have seen some stuff in ADR and it looks really good. And also I was there when we were shooting it and I’m really excited about it. But I would like to see it myself. Hell, I would watch it on Disney Plus," he said. Though we doubt if his co-stars, Johansson, Florence Pugh and Rachel Weisz will be equally thrilled about this idea. Black Widow Trailer: From Iron Man 2 to Black Panther, Fans Find Interesting Callbacks in Scarlett Johansson's Superhero Film.

What are your thoughts on it? Do you think it's a good idea to have Black Widow release on Disney+ or think it's a blunder that Disney would ever make? Let us know by tweeting @latestly.

(The above story first appeared on LatestLY on Mar 26, 2020 02:42 PM IST. For more news and updates on politics, world, sports, entertainment and lifestyle, log on to our website latestly.com).