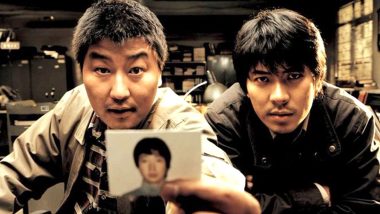 Remember Bong Joon-ho's hit investigative thriller Memories Of Murder? It was based on the true story of a serial killer who murdered 15 women in Hwaseong. As per AFP's report, South Korea Police has now apologised for the botched up investigation which made an innocent man spend 20 years in jail for crimes he didn't commit. The report quoted Provincial police chief Bae Yong-ju saying, "I bow my head down and offer apologies to the victims of Lee Chun-jae's crimes, the surviving families and everyone who suffered damage due to the police investigation, including Mr Yoon." The latter is the man who served a sentence for doing absolutely nothing. Parasite Director Bong Joon-Ho Says He Wishes to Make a Musical Movie In Future

The real culprit is Lee Chun-Jae who is serving a life sentence for rape and murder of his sister-in-law. But worse is he can't be convicted for the Hwaseong murders as the statute of limitations has expired. As per the report, Lee became a suspect only last year and upon questioning, he admitted to all the crimes. He even added four more victims to the list including an eight-year-old girl. Bae told the news agency that he showed no remorse for his deeds.

The report also suggests that four individuals who were suspects in the case committed suicide after being investigated and also allegedly faced Police brutality. Memories Of Murder was Bong Joon-ho's second feature film which was a huge hit at the box office.

(The above story first appeared on LatestLY on Jul 02, 2020 02:58 PM IST. For more news and updates on politics, world, sports, entertainment and lifestyle, log on to our website latestly.com).