Wonder Woman 3: Gal Gadot Hints That Her Kids Could Have a Cameo in the Upcoming DC Film

Gal Gadot is set to reprise her role as the titular superheroine in the upcoming third instalment of Wonder Woman, and after her children and her husband, Yaron Versano, made cameos in Wonder Woman 1984 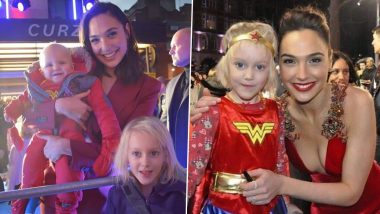 Actress Gal Gadot is set to reprise her role as the titular superheroine in the upcoming third instalment of Wonder Woman, and after her children and her husband, Yaron Versano, made cameos in Wonder Woman 1984, she has suggested they could return for the next movie. She said: "Well, we might. They can get used to it. It's a nice souvenir in each movie they're going to be older and older." Gadot gushed that she is thrilled to get to work with 'Wonder Woman' director Patty Jenkins again, reports femalefirst.co.uk. Gal Gadot Reveals She Is ‘Happy’ To Have Robert Pattinson As the New Batman and Zoë Kravitz As Catwoman in DC Universe.

She said: "The most amazing thing - other than the fact that I get to wear the costume, the Wonder Woman costume again and get inside her boots - is the fact that I can work with my amazing collaborators and work with (director) Patty Jenkins again and I'm super, super grateful for that." Red Notice Trailer Out! Dwayne Johnson, Gal Gadot and Ryan Reynold’s Film To Hit Theatres on November 5 and To Stream on Netflix From November 12! (Watch Video).

Gal, who has Alma, 10, Maya, four, and Daniella, who she welcomed into the world in June, also opened up about being a mom to three daughters and how she copes with being a parent and an international movie star.

On the advice her spouse gave her, Gadot said on Entertainment Tonight: "He told me, 'It's for you to choose, but just think about what kind of example you want to set for her'. "So I just think about it as a win-win and of course something's always got to give. We can't be just perfect, but the only thing we can do is just give our best and do our best."

(The above story first appeared on LatestLY on Oct 25, 2021 11:30 AM IST. For more news and updates on politics, world, sports, entertainment and lifestyle, log on to our website latestly.com).