LatestLY Exclusive! Ajay Devgn To Shave His Head and Go Minus Makeup To Play 'Chanakya'!

After playing the giant historical figure, Marathi maawala-subhedar, Tanhaji, the talented actor is all set for this interesting period drama directed by Neeraj Pandey. 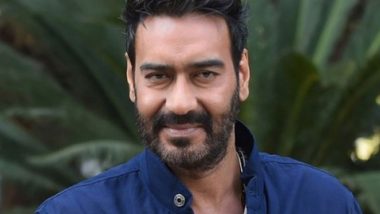 Looks like Bollywood star Ajay Devgn is all set to take his love for history, as indeed for period dramas, a notch up with his forthcoming endeavor Chankanya. Director Neeraj Pandey's film will see Ajay Devgn transform into the ancient philosopher, economist and the royal advisor Chanakya, who was known for his unmatched intelligence and strategy-making skills.  Devgn has been reading quite extensively to prepare for this role for more than two years now. After playing the giant historical figure, Marathi maawala-subhedar, Tanhaji, the talented actor is all set for this interesting period drama.

The film is likely to go on floors by the end of this year for which the production team is shifting gears. A little birdie who is keeping a close watch on this production tells us that Devgn has decided to go bald for this film to look the part. "Ajay Devgn is known for giving his blood and sweat to the part he plays. His integrity is unparalleled. Since the film is heavy on VFX and  CGI, earlier the makers were toying with the idea of using prosthetics and makeup expertise to make Devgn look the part, but given the actor's penchant for authenticity, he has decided to go bold. His conviction in the role has already given the much boost to the project," informed the source. Maidaan: Fourth Schedule Of Ajay Devgn's Film To Commence From February 14

The much-celebrated figure Chanakya was known for his timeless treatise on economics and on life in general. He was known for possessing sharp wit which was further bolstered by his incredible oratory. Given the need for his physical appearance, we gather, the film requires Devgn to go sans makeup. Given Devgn's intense piercing gaze and the proverbial thehraav in his speech, everything will go in sync with the persona the makers are trying to create. 'Maidaan' vs 'RRR' Clash on October 13: Exhibitors Will Suffer, Feels Industry

Apart from this film, Ajay Devgn is also working on his film titled Maidaan in which he plays football coach Syed Abdul Rahim. He also has Bhuj: The Pride of India in his kitty. Looks like the calendar is blocked with some really interesting endeavors for Devgn.

(The above story first appeared on LatestLY on Feb 17, 2021 03:25 PM IST. For more news and updates on politics, world, sports, entertainment and lifestyle, log on to our website latestly.com).