The release of several films had to be pushed back in the wake of coronavirus outbreak. Boney Kapoor has confirmed that all his films will hit the big screens directly and not OTT platforms. 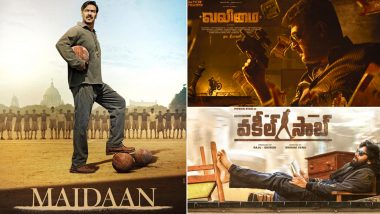 Boney Kapoor made his debut as a producer in south with the Tamil film Nerkonda Paarvai, starring Thala Ajith in the lead. It was a remake of Amitabh Bachchan’s Hindi film Pink. The producer has once again teamed up with Thala Ajith for the action drama Valimai. Besides that, there are two more projects in his kitty – Ajay Devgn starrer Maidaan and the Telugu film Vakeel Saab (again the remake of Pink) starring Pawan Kalyan. The popular producer of Indian Cinema has confirmed that all his films will hit the big screens directly and not OTT platforms. Maidaan: Ajay Devgn’s Sports Drama Gets Postponed to 2021?

The release of several films had to be pushed back in the wake of coronavirus outbreak. There are many makers who are now opting for a direct OTT release of their films (since they are ready) as there is no clarity by when the cinema halls will be reopened. But Boney Kapoor has decided not to skip theatrical release of Maidaan, Valimai and Vakeel Saab. In an interview to HT, the producer has opened up about the release of his new projects and also shared his opinion on filmmakers’ decision to release films on OTT platforms.

Talking about films being released in theaters, Boney Kapoor stated, “I strongly believe there are certain films, which are meant for larger-than-life, theatrical experience, and so, they should go to cinema halls first. As for me, I am extremely excited to bring my (new) films to the big screen.” Valimai: Boney Kapoor Gives an Update on Thala Ajith's Next, Says the Shooting is Half Complete.

Regarding filmmakers decision to release their movies on OTT platforms, Boney Kapoor mentioned, “See, these are extraordinary times that none of us -- globally -- have witnessed before. Talking about movies, if a certain producer is ready with his/her film and can’t afford to wait (for theatres to reopen) then OTT platforms can be a big blessing for them as they can easily recover their investments.” We are sure, fans are now happy to know that Maidaan, Valimai and Vakeel Saab will not be skipping theatrical release.

(The above story first appeared on LatestLY on Jun 23, 2020 12:30 PM IST. For more news and updates on politics, world, sports, entertainment and lifestyle, log on to our website latestly.com).