The makers had planned to release Maidaan first on November 27, but later pushed it to December 11. Maidaan, which revolves around the golden era of Indian football from 1952-1962, has been postponed once again. 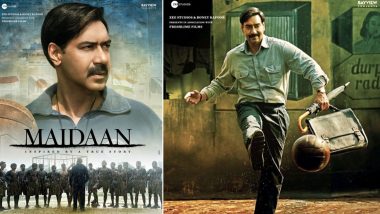 Maidaan, the biographical sports drama, is another major release featuring Ajay Devgn in the lead role. Fans have been eagerly waiting to watch this film on the big screens. The makers had planned to release this film first on November 27, but later pushed it to December 11. Maidaan, which revolves around the golden era of Indian football from 1952-1962, has been postponed once again. It is heard that it will not make it to the big screens by the end of this year. Fans of Ajay Devgn will reportedly have to wait a little longer to watch this sports drama. Maidaan: Ajay Devgn Starrer Gets Postponed, New Poster Reveals the Sports Drama Will Hit the Screens on December 11.

There are several films across languages that have been postponed owing to the novel coronavirus. Several industries have been hit and show business is one among them. In order to avoid mass gatherings, cinema halls across the globe have been closed down. And there is no clarity by when it will reopen. This has led several makers to either postpone their films theatrical release date or get a direct web release. Yes, there are some makers who have already stated that they would be releasing their films on OTT platform. Ajay Devgn’s Bhuj: The Pride Of India to Release On Vijay Diwas 2020?

Talking about Amit Ravindrenath Sharma’s film Maidaan, lead actor Ajay Devgn will be seen essaying the role of the legendary coach Syed Abdul Rahim, who is widely known as the founding father of Indian football. A source revealed to Mid-Day, “Maidaan will be ready for release only in 2021.” The makers are yet to make an official announcement on the same. Besides this film, there’s another Ajay Devgn starrer that has been postponed, Bhuj: The Pride Of India. This movie was planned to be released during Independence Day weekend, but now it is said that the makers are eyeing for mid-December release, on Vijay Diwas 2020. Stay tuned for further updates from the world of entertainment.

(The above story first appeared on LatestLY on May 22, 2020 08:54 AM IST. For more news and updates on politics, world, sports, entertainment and lifestyle, log on to our website latestly.com).