Priyanka Chopra Birthday: 5 Movies Made Better With Her Spunk

Priyanka Chopra turns 38 today. She has starred in quite a number of movies. We are going to list down the movies that we loved for her spunk. She has made so many characters memorable with her oomph. Here is a list. 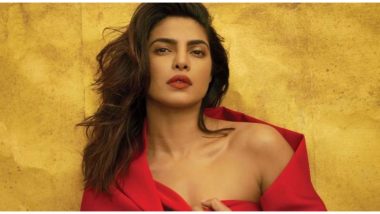 Priyanka Chopra turns 38 today. The actress started her journey to conquer the world when she was crowned as Miss World 2000, after her mother had jokingly sent her pictures to Miss India pageant. After modelling, she moved to acting, soon enough, and became a popular star in Bollywood before shifting base to Hollywood. She headlined the thriller series, Quantico for ABC. We will be here all day, if we talked about the list of her achievements.

So, let us get right to it. She has starred in quite a number of movies. We are going to list down the movies that we loved for her spunk. She has made so many characters memorable with her oomph. Here is a list.

The actress looked gorgeous throughout the movie. You probably had to watch it again to pay attention to the plot. She worked at a fashion magazine and her style was her spunk.

This movie propelled Priyanka into heights of stardom. She played a small-town girl who rises to fame in the world of modelling. To give you an idea about her spunk, all you have to do is pay attention to her conversation with her to-be boss.

Priyanka made her Bollywood debut with a negative role. What a bold move to begin with. She played Victoria, a ruthless woman who'd stop at nothing to get what she wants. Sassy comebacks, sexy dresses, charming personality and a tendency to kill, she was no less powerful than a Bond villain.

We know the movie is an ode to grief and the actress play the role of a mother of a deceased daughter. But, even the main character pointed out that grief didn't mean that Priyanka's character stopped living. She wore a bright colour to the funeral like it was a celebration of a life well-lived

Also, Priyanka's character ages from 21 to 50 in the movie. You'd expect her character to dress down when aged, but that's the false narrative fed to us by movies. Priyanka dresses like any normal 50 years old would. You know, normal. Without those extra, inauthentic grey hair.

Also, from stealing a sweater off a mannequin to setting up her daughter with a date, if she was not the spunkiest mother in The Sky Is Pink.

Again, Priyanka brought spunk on board at an unlikely place. The actress played lower-middle-class Marathi mulgi, but, God she had spunk. From demanding to get married at her own terms to firing a gun when absolutely needed, she was a firecracker in a salwar kameez from the streets of Mumbai.

In the near future, Priyanka has the brightest line up of projects. She will be seen in the superhero film, We Can Be Heroes, reportedly playing a villain again. She also has finished shooting for Netflix's The White Tiger. She is developing a wedding comedy for Netflix with Mindy Kaling. She has also signed a first-look deal for her production house with Amazon. Before that, she had already signed the dotted line to star in Avengers: Endgame directors' global event series, Citadel. She will also star and develop Sheela, a movie about Maa Anand Sheila, for Amazon. She is also set to appear in Matrix 4 with Keanu Reeves.

(The above story first appeared on LatestLY on Jul 18, 2020 12:34 AM IST. For more news and updates on politics, world, sports, entertainment and lifestyle, log on to our website latestly.com).