Janhvi Kapoor, Rajkummar Rao and Varun Sharma-starrer, Roohi, happens to be the first A-lister flick that has released in theatres after the pandemic. The horror-comedy hit the screens on the auspicious occasion of Mahashivratri 2021 i.e March 11. Here, check out the critics' review of the flick. 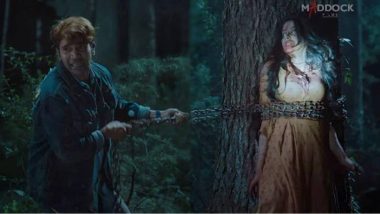 Janhvi Kapoor, Rajkummar Rao and Varun Sharma-starrer, Roohi, happens to be the first A-lister flick that has released in theatres after the pandemic. The horror-comedy hit the screens on the auspicious occasion of Mahashivratri 2021 i.e March 11. Helmed by Hardik Mehta, the trailer of the movie was released long back and was well-received by the audience. Earlier, the film was titled Roohi Afza, but the makers changed it to Roohi. So, is the flick, worth a watch? Read on... Roohi Trailer Twitter Review: Janhvi Kapoor's 'Chudail' Avatar and Rajkummar Rao-Varun Sharma’s Comedy Get a Thumbs Up From Fans!

The reviews by the critics are out and going by it all we can say is that Roohi has garnered mixed reactions. While the actors are majorly lauded, the flaw looks at the maker's end. However, there are few reviews that have claimed that the flick is good at making you laugh. FYI, the story of Roohi revolves around Janhvi (ghostly soul) who abducts brides from their honeymoon, wherein Rajkummar and Varun play the saviour. Check out the early reviews of the film below. Janhvi Kapoor and Rajkummar Rao's Roohi-Afzana Gets a New Title and a Release Date, Film Will Now Clash with Kiara Advani's Indoo ki Jawaani on June 5, 2020.

First things first, tagging the film with more lows and fewer highs, The Quint writes, "For a film like this, it’s the easy laughs that one would ideally want to go for, but the narrative has more lows than highs. By the end of it, the screeching churail becomes almost inaudible and we are left to join the dots ourselves. Not the best way to end things."

TOI says, "The film has its share of laughs with references made to moments from iconic films – for instance, Rose “letting” Jack die in the iconic Titanic and the unforgettable ‘palat’ moment in Dilwale Dulhania Le Jayenge. The film, written by Mrighdeep Singh Lamba Gautam Mehra, is replete with well-written one-liners, which land smoothly on most occasions."

For Indian Express, the movie is plain horrible and so they write, "What’s missing is a coherent plot and writing. All we get is one cringe-inducing sequence after the next (‘jhaad-phoonk’, exorcism, women in chains), where we are treated to problematic lines: when, when will mainstream movies stop terming wives ‘chudails’?

"Rather than Stree, a better exemplar for Roohi’s failed genre-bending experiments is Anvita Dutt’s Bulbbul, a beguiling tale of righteous revenge carried out by a woman with inverted feet and a clear sense of identity and purpose. Without the entertainment offered by Stree or the conviction of Bulbbul, Roohi is neither here nor there, like its dual-sided heroine," writes Scroll. Rajkummar Rao, Janhvi Kapoor’s Roohi Afzana Is Now ‘Roohi’, Makers Invite You To a ‘Horror Wedding’ on March 11.

NDTV gives two stars and adds, "The blood-curdling banshee-wail that the titular female protagonist lets out in the climax of Roohi is ear-splitting all right, but it isn't exciting enough for filmgoers to sit up and respond to it in the way that they would to a more coherent clarion call. It is best to lay this ghost to rest and wait for a better deal."

Well, going by the above reviews, all we would say is that go for the film if you are a fan of Janhvi Kapoor, or the story looks a bit meh. Having said that, there are also some fun dance numbers in the flick too. So, are you going to watch the film in theatres? Tell us in the comment section below.

(The above story first appeared on LatestLY on Mar 11, 2021 10:59 AM IST. For more news and updates on politics, world, sports, entertainment and lifestyle, log on to our website latestly.com).