Shehnaaz Gill is unstoppable, as she is signing one project after another. The latest we hear is that the actress-singer has collaborated with Badshah for a music video and has already started shooting for the same in Jammu and Kashmir. Check it out. 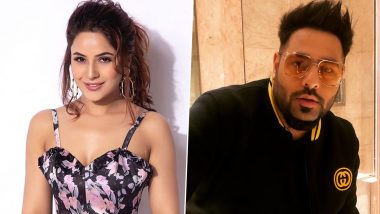 Shehnaaz Gill is unstoppable. As a few days ago, she was in Goa with Sidharth Shukla shooting for a romantic song that will be out on Valentine's Day. And now, on Monday (Feb 1) she was spotted leaving the city for Jammu and Kashmir to shoot for her next single. This upcoming number of Gill will see her for the first-time with rapper Badshah. Yes, you read that right. It's Shehnaaz X Badshah. As soon as this news broke online, Shehnaazians could not keep calm and showered love on the micro-blogging site. Shehnaaz Gill's 'Tuada Kutta Tommy' Dialogue Gets a Quirky Musical Touch, Courtesy 'Rasode Mein Kaun Tha' Fame Yashraj Mukhate (Watch Video).

Popular Bollywood photographer uploaded a picture of Shehnaaz  from Kashmir and captioned it as "Shehnaazgill in Jammu Kashmir for @badboyshah new track." That's not it, as rapper Badshah also liked the post, kinda confirming that the collaboration is indeed happening. Well, must say, Sana (Shehnaaz) is going places and is slowly and steadily becoming one of the most admired singers in the showbiz. Sidharth Shukla and Shehnaaz Gill Party Hard in Goa, Groove To 'Teri Bhabhi' Song (Watch Video).

As per a report in Indian Express, the song will also see Badshah making an appearance alongside Shehnaaz. It further elaborates that the music video is expected to release by the end of the month and will be a typical Badshah rap.

Also, for the one's unaware, Shehnaaz became a huge name after her stint on Bigg Boss 13. She did not win the reality show but was a second runner-up. She has been in the news since then for her body transformation, style and has also featured in a few music videos like 'Shona Shona', 'Bhula Dunga' and more. Stay tuned!

(The above story first appeared on LatestLY on Feb 02, 2021 02:50 PM IST. For more news and updates on politics, world, sports, entertainment and lifestyle, log on to our website latestly.com).