Movie buffs are thrilled to watch Thalapathy Vijay and Pooja Hegde together on the big screen. Ahead of Beast’s grand theatrical release, let’s take a look at some of the key details of the film. 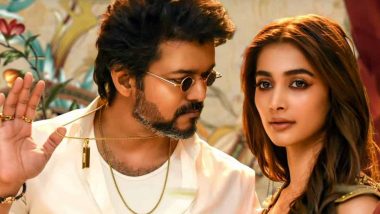 Movie buffs are thrilled to watch Thalapathy Vijay and Pooja Hegde together on the big screen. From the posters, songs, trailer, the excitement level for Beast is just sky high. The trailer of the film has given a glimpse of the Nelson Dilipkumar directorial that is produced by Kalanithi Maran under the banner of Sun Pictures. Beast New Promo Out! Thalapathy Vijay And Pooja Hegde’s Unseen Stills Take Internet By Storm (View Pics And Video).

There’s just few days left for Beast to hit the big screens. Ahead of the film’s grand theatrical release, let’s take a look at some of the key details of the action thriller. Beast: Thalapathy Vijay’s Film Titled As Raw In Hindi.

Plot – The film features Vijay as a spy named Veera Raghavan who is on a mission to rescue the hostages who have been trapped in the mall hijacked by terrorists.

Watch The Trailer Of Beast Below:

Release Date – Beast is all set to hit the theatres worldwide on April 13. Other than Tamil, its dubbed versions include Hindi, Telugu, Malayalam and Kannada. The Hindi version of Beast has been titled as Raw.

Reviews – The reviews for Vijay and Pooja Hegde’s Beast are out! Click on the link to read LatestLY's review on Beast.

(The above story first appeared on LatestLY on Apr 10, 2022 04:49 PM IST. For more news and updates on politics, world, sports, entertainment and lifestyle, log on to our website latestly.com).