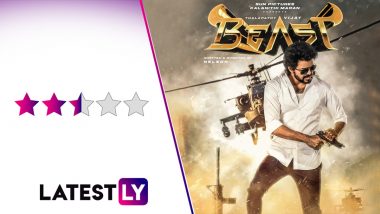 Beast Movie Review: I am always concerned when talented filmmakers work with bigger superstars. There is always a 99% possibility that the director fawns over the superstar roped in, and ends up making his or her weakest film. Take Thalapathy Vijay for example. His last film, Master, a blockbuster in its own right and definitely a treat for his fans, is far from being the best work of its director Lokesh Kanagaraj who gave us the immensely thrilling Kaithi. With his latest, Beast, Thalapathy Vijay teams up with Nelson Dilipkumar, whose last movie - Doctor - I semma enjoyed. So it is quite annoying that Nelson's collaboration with the Tamil superstar doesn't live up to the fun quotient of his previous movie, unless you are a pure Vijay fan of course. Theatrical Releases Of The Week: Yash’s KGF Chapter 2 Vs Thalapathy Vijay’s Beast, Big Box-Office Clash!

That said, I don't think Vijay is at fault here, and I don't want to believe that the director has let go off his sensibilities to over-appease the superstar's legacy. Like check the intro of the actor in Beast. Thalapathy Vijay plays Veeraraghavan, a RAW agent who plays by his own rules, of course. But his intro scene is quite crisp and sharp, unlike the frustratingly over-lengthy and extremely reverential one in Master.

Veeraraghavan, when we first meet him, is in for a secret mission in POK where he has to catch a terrorist mastermind Umar Farooqui (Lilliput). This leads to a stunning action sequence, whose level of stylish brilliance is, sadly, never replicated later on in the movie. Yes, even the much talked about, but CGI-dodgy aerial dogfight in the climax of Beast doesn't come even a fraction of what this opening fight scene pulls off.

Anyway, the mission however doesn't go all well for Veera. While he manages to capture the terrorist alive, a civilian casualty leaves him guilt-stricken and he loses faith in the army, following which he leaves RAW. He suffers from PTSD and undergoes treatment for the same, though don't expect Beast to explore this beyond some jokes and surface-level superficiality. In what is a very contrived scene, he meets Preethi (Pooja Hegde) at a 'North Indian' wedding, where his therapist takes him to meet 'super figures'. Really don't ask. Tamil cinema's obsession with objectifying women in the name of humour continues in all its glory here.

This follows into the most random insertion of the now-popular "Arabic Kuthu" song, and immediately followed by the heroine falling for our hero, never mind she is already engaged to someone else. Beast isn't a movie that asks you to seek logic in what's happening, but just expects you to sit back, relax and enjoy while your favourite superstar is having a jolly good time on screen. This also extends to the main plot point of the movie, where a group of terrorists take over a mall in Chennai, with the demand to release Umar from Tihar jail. Beast: Thalapathy Vijay Is A Big Shah Rukh Khan Fan And This Throwback Video Says It All.

Unfortunately for them, Veera is also there, along with Preethi, and a bunch of comedians like Yogi Babu, VTV Ganesh, Redin, Sathish and co, that carry forward the director's trademark irreverent humour to the hostage drama.

It doesn't matter whether the situation demands it or not, but the jokes will keep coming on at inopportune moments. It also doesn't matter that most of the jokes don't land well (Preethi's annoying fiance is the worst of the lot). The ones that do work well are mostly courtesy VTV Ganesh's security agency owner, whose frustrated comic delivery cracked me up nearly every time - he is easily the film's scene-stealer.

However, the humour and Beast's consistent attempts to make Thalapathy look uber-cool no matter how many bullets get shot at him, and how each one of them unerringly always miss him, thank the slo-mo Gods, dilute down the Die Hard inspired hostage crisis. It also doesn't help that we get to see the most callous terrorists on screen as the antagonists, their dumbness not the film's attempt to add deliberate humour. They are so bad at their jobs that Hans MacGruber would himself have jumped off the building laughing all his way down, instead of being thrown off the roof by John McClane. Despite being tackled by Veera at every nook and turn, it is disbelieving to see them so nonchalant about securing the hostages, considering their leader boasted about killing hostages in some other country during a similar situation. Here, the only casualty is an old woman who is made to be so annoying that the movie wants us to be cool that she is killed without mercy, and we never see the ramifications of that death.

Nelson Dilipkumar isn't much in the same form as we saw his work in Doctor, both as a director and a writer. There are stylish flourishes, for sure; I just love the swag in which Veera operates his shotgun. But if you expect something like the fantastic metro-train fight scene from Doctor here, you would be super disappointed, despite a ridiculous scene where Veera drives a car through inside the mall. Doctor Movie Review: Sivakarthikeyan’s Film, Streaming on Netflix, Is a Very Entertaining Comic-Thriller.

While the director is not in his best knick here, he at least made sure that Thalapathy fans would get some of their paisa vasool moments here in how he presented the actor. Vijay looks fabulous, his cool demeanour permeating beyond the screen and charming you instantly even if the scene around him doesn't work.

Pooja Hegde continues the infamous tradition of Tamil potboilers being absolute clueless about what to do with the leading ladies, apart from letting them be PYT and match steps with the hero. Selvaraghavan the director makes a decent acting debut as Altaf Hussein, the intelligence officer who helps Veera (and thereby allowing the movie to use him as a 'good' Muslim to balance out the terrorists). Yogi Babu, Sathish, Redin, Aparna Das are okay in their roles. Can't fathom why Shine Tom Chacko is in the movie, being cast as a reluctant Kashmiri terrorist.

Anirudh's two songs are already huge hits, but I particularly love the picturisation of "Jolly O Gymkhana" that plays during the end-credits.

- Thalapathy Vijay all the way!

- The Action Scene in the First Act

- The Hostage Crisis Drama is Not Well-Executed

Beast is yet another frustrating case of the superstar being in a fine form, but the director taking a step back here to let the actor shine. The movie would be a treat for Thalapathy Vijay fans, but if you walk in the theatre to see Nelson exceeding his enjoyable work from Doctor, you might walk out of there disappointed after three hours.

(The above story first appeared on LatestLY on Apr 13, 2022 11:15 AM IST. For more news and updates on politics, world, sports, entertainment and lifestyle, log on to our website latestly.com).