So was all this hype around the AR Murugadoss and Rajinikanth's action film Darbar worth it? Yes and No! 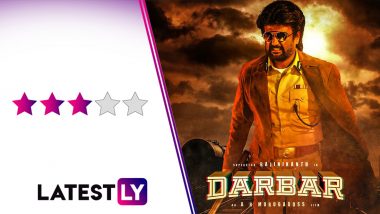 All the Rajinikanth fans were waiting for the release of Tamil film, Darbar enthusiastically. Every poster and every BTS was celebrated by the fans with pomp. So was all this hype around the AR Murugadoss action film worth it? Yes and No! The flick also stars Nivetha Thomas and Nayanthara in the lead, with other actors like Prateik Babbar, Suniel Shetty, Dalip Tahil, Nawab Shah and Yogi Babu in crucial roles. Rajini plays the role of a fierce cop named Aditya Arunachalam who gets posted as police commisioner in Mumbai police. He is on a mission to eradicate the drug racket in the city by hunting down the mafia who runs it. It’s Ajay Devgn’s Tanhaji vs Rajinikanth’s Darbar vs Deepika Padukone’s Chhapaak Clash!.

First things first, you are in for a visual treat if you are a Rajini fan. If not, you can take your logic, arm-chair criticism and go home. From his smashing entry to the power-packed climax, every scene that has his presence is a delight to watch. Not to forget, we are talking about a 69-year-old person here who is charming enough to still compel people to hoot and whistle.

As promised by the makers, the movie is filled with action sequences and slow motion fight scenes. Rajinikanth delivers one of his finest performances not only in the action aspect but also in the comical and emotional scenes. His look as the cop in the film gets extra brownie points from me as the makers did not leave a chance to bring out that swagger streak out of him. The film also has its share of funny and emotional moments.

While many must have waited with the bated breath for Nayanthara's performance here, it is Nivetha Thomas who takes away the cake. She was definitely a surprise package!  Rajinikanth and Nivetha's beautiful and emotional father-daughter relationship is the USP of the movie. Also, Yogi Babu needs to be given a special mention for making the audience laugh with his expressions and amazing comic timing. Nayanthara makes a late entry and by the end of the movie, one might feel why did she even exist in this movie? She has absolutely no work to do except for looking exceptionally pretty and strutting around with confused expressions and designer sarees. The story line simply had to force her character to add some glam quotient, that was not at all needed, to be honest. This also impacted on the supposed-to-be-crackling chemistry between her and Thalaiva.

Other characters like Prateik Babbar, Nawab Shah, Sriman were fit for their respective short roles. Suniel Shetty, as a ruthless drug mafia head was impressive with his powerful performance. Although, he did not get much of the chance to explore this character, he did give his best in whatever way he could.

One of the most crucial parts of the film is itAAs music. Anirudh Ravichander just did a marvellous job when it comes to background score. "Chumma Kizhi" was fun to watch but sure looked like a forced addition. However, the Thalaivar theme made the movie grand. Speaking of cinematography, Santosh Sivan must be credited for some of the amazing shots captured in the heart of Mumbai.

Nayanthara (why was she even there?)

As I said above, the movie is a gift to all the Rajini fans and it must be taken in that sense! The movie sure had its dramatized portions, especially in action scenes. But then what else would you expect from an actioner that has the combination of AR Murugadoss and Rajinikanth? The superstar returns with a swag and any of his die hard fan should not miss this film.

(The above story first appeared on LatestLY on Jan 09, 2020 11:20 AM IST. For more news and updates on politics, world, sports, entertainment and lifestyle, log on to our website latestly.com).