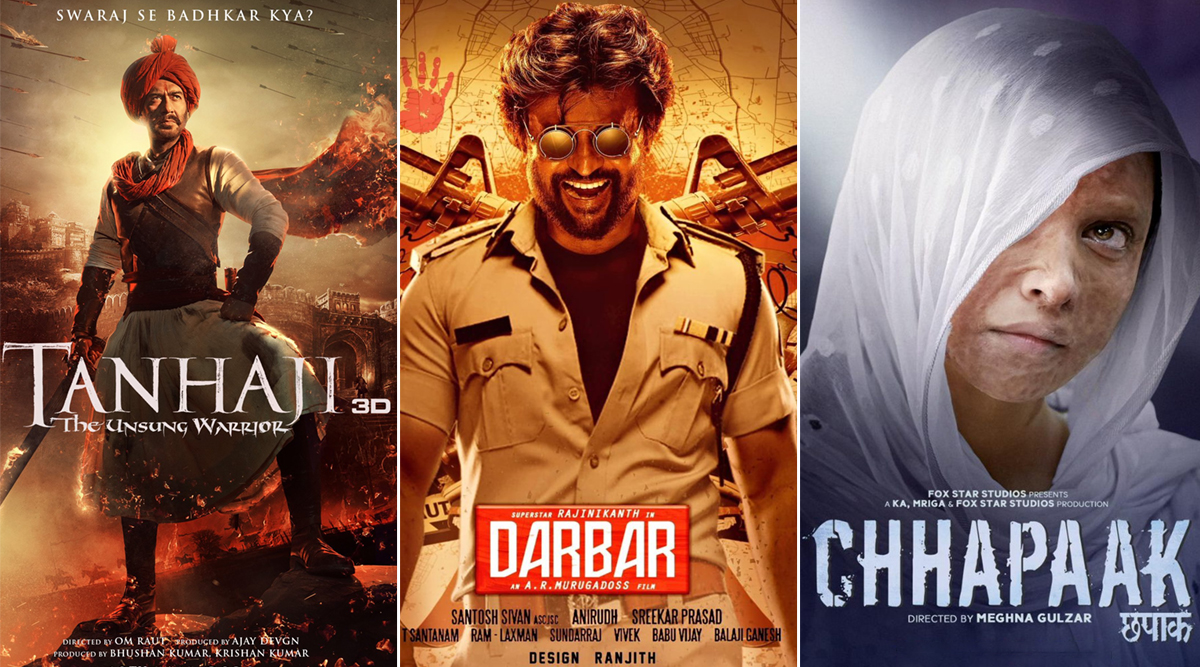 January 2020 is going to be a treat for all movie buffs! Across industries there are some major releases happening and fans just cannot wait to watch it on the big screens. Right now the talk is about three big films that are all set to clash at the box in the second week of January 2020 - Tanhaji: The Unsung Warrior, Darbar and Chhapaak. Ajay Devgn, Rajinikanth and Deepika Padukone’s films, respectively, are going to hit theatres in the second week of January 2020 and we wonder, who will win the box office battle. Petition Filed against Ajay Devgn’s Tanhaji in Delhi High Court over the True Lineage of the Maratha Warrior, Hearing on Dec 19.

All the three films are in buzz for all the right reasons. These three celebs have humongous fan followers across the globe and when it comes to their films, nobody can afford to miss watching them on the big screens. While Ajay Devgn’s Tanhaji and Deepika Padukone’s Chhapaak are slated to release on January 10, 2020, superstar Rajinikanth’s Darbar would be releasing a day before these two movies, January 9, 2020. For the unversed, Darbar is releasing in Tamil, Hindi and Telugu languages. Darbar New Poster: Rajinikanth as a One Man Army Will Make Singham, Simmba and Sooryavanshi Happy.

Tanhaji: The Unsung Warrior that is set in the 17th century, is based on the life of founder of the Maratha Empire - Tanaji Malusare. Widely known for his role in the Battle of Sinhagad, Ajay Devgn would be seen playing his role. Saif Ali Khan and Kajol would also be seen in key roles. Directed by Om Raut, the film is produced under the banners of Ajay Devgn FFilms and T-Series. Chhapaak: Deepika Padukone's Malti is Shaken but Not Stirred in these New Movie Posters.

Watch The Trailer Of Tanhaji: The Unsung Warrior:

Darbar marks the return of superstar Rajinikanth in the avatar of a cop, which he is playing almost after a gap of more than two decades. We have already seen a glimpse of his look in the posters released earlier and today the makers would be releasing the film’s trailer. The audio of Darbar has already turned out to be a huge hit. And now fans are eagerly waiting to watch Rajinikanth and Nayanthara sharing screen space in Darbar.

Meghna Gulzar’s upcoming movie Chhapaak is based on the life of acid attack survivor, Laxmi Agarwal. Audiences were awestruck to see the transformation of film’s leading lady, Deepika Padukone as Malti, when the trailer was released. The movie also features Vikrant Massey in the lead.

Watch The Trailer Of Chhapaak Below:

All the three upcoming flicks have grabbed audiences’ eyeballs. And we are sure, nobody would want to miss any of it. But which movie will win in terms of box office collections, we’ll have to wait and watch. Stay tuned for more updates from the world of entertainment!