Drishyam 2: Mohanlal Welcomes Meena on the Sets of Jeethu Joseph’s Film on the Occasion of Her Birthday! 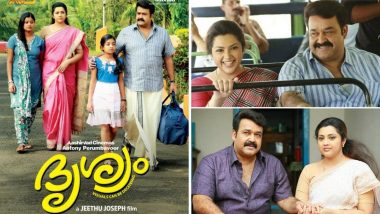 The Malayalam movie Drishyam that starred Mohanlal and Meena in the lead was written and directed by Jeethu Joseph. Released in 2013, this thriller grossed more than Rs 750 million worldwide and ran for more than 150 days in theatres. It was one of the highest-grossing Malayalam films of all time until the box office record was broken by Pulimurugan in 2016. Drishyam was widely praised by critics and fans for its engaging narrative, direction and performances of the star cast. Ahead of Mohanlal’s birthday, the makers had announced about Drishyam 2 and on the day of his birthday, a teaser of the film was dropped online. Drishyam 2 Confirmed Ahead Of Superstar Mohanlal’s 60th Birthday!

Today, south beauty Meena, who had played Mohanlal’s onscreen wife in Drishyam, turns a year older. On the occasion of her birthday, Lalettan, as he is fondly called, has not only extended her birthday wishes, but has also welcomed her on the sets of Drishyam 2. It is now official that Meena will be seen as the leading lady in Jeethu Joseph’s Drishyam 2. Sharing a beautiful throwback picture of Meena, Mohanlal wrote, “Happy Birthday Meena and Welcoming you to the sets of #Drishyam2 #HappyBirthdayMeena”. Shooting of Mohanlal’s Drishyam 2 to Begin By mid-August?

Meena The Leading Lady In Drishyam 2

Happy Birthday Meena and Welcoming you to the sets of #Drishyam2#HappyBirthdayMeena pic.twitter.com/SBrQnEe1Dx

According to reports, Mohanlal would be joining the sets of Drishyam 2 on September 20. The makers had initially planned to begin the shooting of the film in August, however, it had to be delayed owing to the ongoing global crisis. While speaking to students at the Additional Skill Acquisition Programme (an initiative taken by Kerala government), director Jeethu Joseph had stated that Drishyam 2 is set seven years later from when the first part ended. We just can’t wait to know more details of this upcoming Malayalam movie!

(The above story first appeared on LatestLY on Sep 16, 2020 10:17 AM IST. For more news and updates on politics, world, sports, entertainment and lifestyle, log on to our website latestly.com).