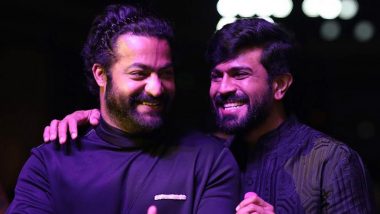 The much-awaited magnum opus of S.S. Rajamouli is just a day away from hitting the theatres across the world. The 'RRR' trio, who have been involved in the promotions, had a candid interview with Rana Daggubati, in which Jr NTR compares Ram Charan to a 'Golgappa'. RRR: Makers Drop Exciting Stills of Jr NTR As Bheem and Ram Charan As Ramaraju From SS Rajamouli’s Magnum Opus! (View Pics).

Ram Charan and Jr NTR, who are the most happening celebrities right now, were seen enjoying a conversation with Rana Daggubati. During their discussion, Rana had asked the trio to describe each other using a food item. While Jr NTR called Ram Charan, a 'golgappa', Ram reciprocated calling him a 'non-veg thali'.

Jr NTR said, "He's (Ram) like a golgappa. You put him in your mouth, you savor him, and then you start understanding the flavors. It's not your poori, water, and channa. It's everything put together." Ram Charan added, "If I have to relate a dish for him, it's a non-vegetarian thali. A bit of everything and it can never be a vegetarian."

(The above story first appeared on LatestLY on Mar 24, 2022 06:47 PM IST. For more news and updates on politics, world, sports, entertainment and lifestyle, log on to our website latestly.com).