Major traces the inspirational journey of Major Sandeep Unnikrishnan and his bravery before he attained martyrdom in the 26/11 Mumbai terror attacks. The film is helmed by Sashi Kiran Tikka. 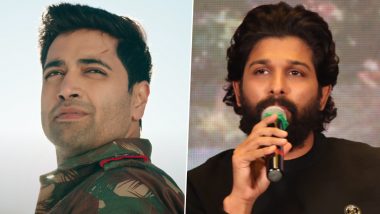 Tollywood star Allu Arjun expressed his delight on social media, congratulating Adivi Sesh and his Major team for delivering such a fantastic film. Major has received rave reviews from all quarters, making it one of the most critically acclaimed films recently. Major Box Office Collection Day 1: Hindi Version of Adivi Sesh’s Film Opens to Rs 96 Lakh in India.

Allu Arjun's tweet reads, "Big congratulations to the entire team of #MajorTheFilm. A very heart touching film. Man of the show Adivi Sesh does his magic once again. Excelled work by director Sashi Tikka. Beautifully crafted. Big congratulations and my personal respect to Mahesh Babu for giving the audience such a heartwarming experience. Major: A story that touches every Indian heart."

Excellent work by director @SashiTikka. Beautifully crafted . Big congratulations & my personal respect to the producer @urstrulyMahesh garu for giving the audience such a heartwarming experience & @AplusSMovies . Major : A story that touches every Indian heart.

Adivi Sesh is overwhelmed with all the love coming his way and with the film crossing Rs 13 crore worldwide on its opening day. Responding to Allu Arjun's tweet, Sesh said, "Big Man! Thank you so much for aLL the love. From Kshanam to Major your support, grace and kindness has been incredible. It means a lot to me personally. You gifted Pushpa on my birthday (Dec 17) and now you have made the success of Major even sweeter." Major Movie Review: Adivi Sesh’s Committed Act Leaves a ‘Major’ Impact in This Likeable Biopic (LatestLY Exclusive).

Adivi not only wowed audiences and critics alike, but he also had industry heavyweights like Allu Arjun rooting for him, praising his powerful and sensitive performance in Major. FYI, Major traces the inspirational journey of Major Sandeep Unnikrishnan and his bravery before he attained martyrdom in the 26/11 Mumbai terror attacks.

(The above story first appeared on LatestLY on Jun 04, 2022 06:39 PM IST. For more news and updates on politics, world, sports, entertainment and lifestyle, log on to our website latestly.com).