Netrikann: These New Stills Of Nayanthara From Beau Vignesh Shivan’s Film Are A Must See!

Netrikann, starring Lady Superstar Nayanthara in the lead, is produced by her beau Vignesh Shivan under the banner of Rowdy Pictures. 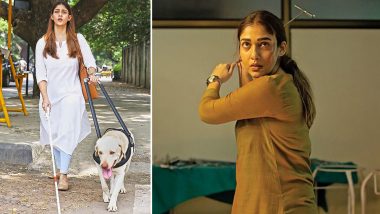 Nayanthara aka the Lady Superstar of Kollywood was last seen in Mookuthi Amman that released on Disney+ Hotstar. The actress who played the titular role in this comedy drama was hailed by critics for her impressive performance. Now movie buffs are looking to her upcoming projects and one among them is Netrikann that is produced by her beau Vignesh Shivan under the banner of Rowdy Pictures. Nayanthara’s Next Film Netrikann to Be Bankrolled by Vignesh Shivan.

The makers of Netrikann had released the teaser of the film on the occasion of Nayanthara’s birthday and it was a nail-biting one. Nayanthara is seen as a visually-challenged person in this movie and the trailer drops the hint how a mysterious man, a killer, keeps chasing after her. There are a few new stills of Nayanthara from this upcoming thriller that have hit the internet. These pictures show how Nayanthara’s character is trying to deal with various circumstances all alone. Netrikann Teaser: Nayanthara Looks Fierce In Her 65th Film's First Look As She Sets Out To Trap A Killer (Watch Video).

Netrikann, written and directed by Milind Rau, also stars Ajmal Ameer in a key role. Besides this movie, the other projects that Nayanthara has in her kitty includes Nizhal, Annaatthe and Kaathu Vaakula Rendu Kadhal. The makers of Netrikann are yet to share the film’s release date. Stay tuned for further updates!

(The above story first appeared on LatestLY on Dec 17, 2020 02:05 PM IST. For more news and updates on politics, world, sports, entertainment and lifestyle, log on to our website latestly.com).