Nayanthara’s 65th film has got its title – Netrikann. This project will be bankrolled by the actress’ beau Vignesh Shivan and the specialty is, this is the latter’s maiden production venture. Netrikann will be produced under the banners of Rowdy Pictures 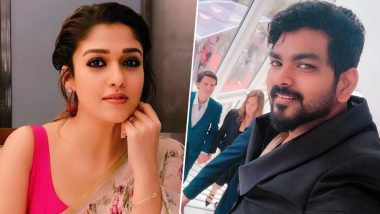 Lady Superstar Nayanthara was last seen in the Malayalam film Love Action Drama. She was paired opposite Nivin Pauly in it and fans were impressed by this refreshing pair’s chemistry. She is undoubtedly one of the busiest actresses down south. The other projects that Nayanthara has in her kitty includes Sye Raa Narasimha Reddy, Bigil and Darbar. All the three projects are mega budget films with leading male actors of south. Before these films hit the big screens, here’s the announcement on Nayanthara’s next project.

Nayanthara’s 65th film has got its title – Netrikann. This project will be bankrolled by the actress’ beau Vignesh Shivan and the specialty is, this is the latter’s maiden production venture. Netrikann will be produced under the banners of Rowdy Pictures. Well, there is another special connection when it comes to the title. This title is similar to superstar Rajinikanth’s 1981 Tamil film, Netrikkan, directed by S. P. Muthuraman. Nayanthara and Vignesh Shivan’s ENGAGEMENT to Happen Soon?

HAppy to be associated with this fresh team 😇

Talking about the title of Nayanthara 65 (as it was tentatively titled before) director Milind Rau told TOI, “The film is titled Netrikann. It is the title of a Rajini sir film (the film, Netrikann, was financed by K Balachander’s production house). We met Pushpa Kandaswamy, KB’s daughter, to get an NOC to use the title. Interestingly, Nayanthara’s first film was produced by KB sir’s production house. So, everything fell in place.” Milind Rau further said, “It is a strong title that works well for our script. You will understand its meaning when the film’s teaser is out. The film is a thriller and her role will be something she hasn’t done before. She liked the script and immediately said OK. It is Vignesh ShivN’s maiden production venture and we are all very happy. The film will be set in Chennai. We begin shoot from today.”  Well, we just cannot wait to know more details about Netrikann.

(The above story first appeared on LatestLY on Sep 15, 2019 09:13 AM IST. For more news and updates on politics, world, sports, entertainment and lifestyle, log on to our website latestly.com).