Netrikann Teaser: Nayanthara Looks Fierce In Her 65th Film's First Look As She Sets Out To Trap A Killer (Watch Video)

Lady Superstar Nayanthara turns a year older on November 18, 2020 and to commemorate the actress' birthday, the makers of her next film, Netrikann, have decided to release the teaser on her birthday. 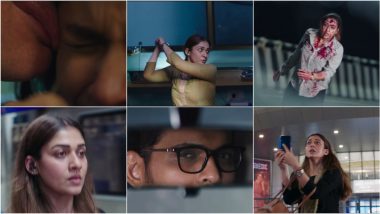 Lady Superstar Nayanthara turns a year older on November 18, 2020 and to commemorate the actress' birthday, the makers of her next film have decided to release the teaser on her birthday. Netrikann was all set for an Independence Day 2020 release but thanks to the COVID-19 pandemic, like a tonn of other films, this too was pushed back. And now, the teaser for Nayanthara's 65th film is finally out. Nayanthara Birthday: 8 Films In Which The Actress Played The Lead And Proved She’s The Lady Superstar Of Kollywood.

Nayanthara will be seen playing a cop cadet who has lost her eye sight after an accident, in Netrikann. The movie is also said to be loosely based on the Korean crime thriller Blind. The teaser gives you the chills right from the beginning where we see a man hunting and torturing innocents. Nayanthara lays out a trap to catch this evil man and he turns his attention on the lady, which leads her to major trouble. There also is a chilling dialogue between the killer and Nayanthara where he tells her (in Tamil) "Your eyes can't see anything but all I can see is you." Nayanthara Birthday: Here Are Some Lesser Known Facts About the Lady Superstar of the South Film Industry.

From what we see in the teaser, Nayanthara perfectly aces the role of a blind woman, even in scenes where she is seen fighting off the killer who is targeting her, which is impressive AF. Netrikann will see actor Ajmal Ameer play a pivotal role alongside Nayanthara. Directed by Milind Rau and produced by Nayanthara's real-life beau Vignesh ShivN, the film's makers are yet to release the film's release date.

(The above story first appeared on LatestLY on Nov 18, 2020 09:40 AM IST. For more news and updates on politics, world, sports, entertainment and lifestyle, log on to our website latestly.com).