Parvathy, reacting to Karan Johar's tweet, put out a Insta story that, with a single word, shows what she feels about it. Check it out below! 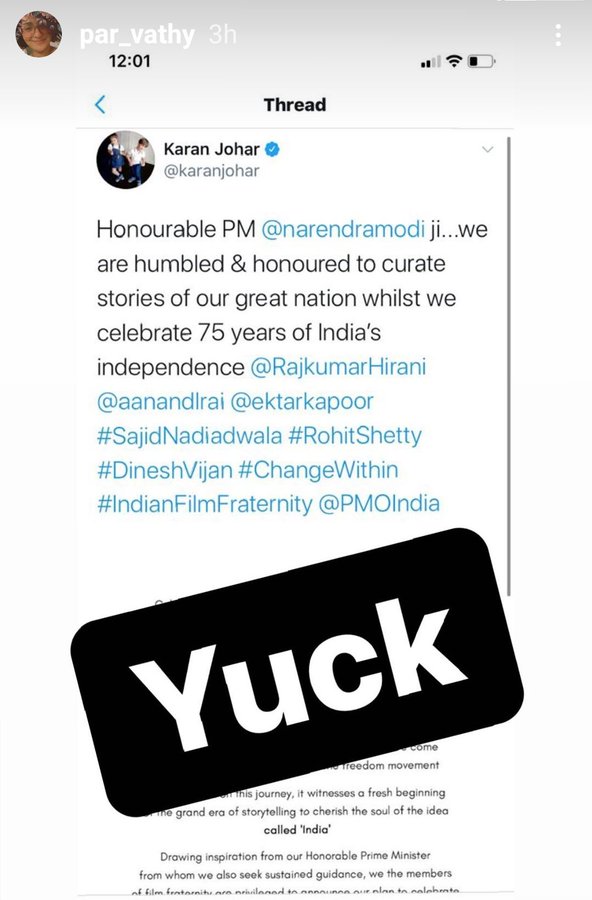 Parvathy's 'Yuck' reaction gets claps from her fans and admirers, with Twitterati praising her gumption. Year Ender 2019: Mammootty, Parvathy, Nivin Pauly and More – 10 Actors Who Owned Malayalam Cinema This Year With Their Marvellous Performances.

So What's in The Diet of Mollywood Women?

There is something in the diet of the women of Mollywood: red chillies, green chillies, coconut, curry leaves and C.O.U.R.A.G.E. @parvatweets ❤️❤️❤️ (H/T @iPriyanka_S) pic.twitter.com/cfWMoeoNqB

Yup that's for you @karanjohar and your bollywood boot lickers.@parvatweets ❤️🔥🔥. pic.twitter.com/mfiM86WQK4

Will Kangana Mind This?

Parvathy, known for her films like Take/Off, Koode and Uyare, is among the few Malayalam actresses who is still strongly fighting for justice for the sexual assault on Malayalam actress, fighting the patriarchy within Malayalam actors' body, AMMA. For her strong feminist views, Parvathy has often been a victim on cyber-bullying, but the actress continues to fight misogyny strongly through her films and tweets.

(The above story first appeared on LatestLY on Oct 05, 2020 03:13 PM IST. For more news and updates on politics, world, sports, entertainment and lifestyle, log on to our website latestly.com).