It was already established by the makers of the film that the film will have two parts. While the first part is titled "Pusha - The Rise", the sequel has been titled "Pushpa - The Fall". 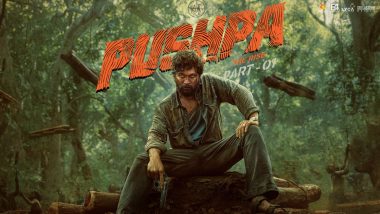 Allu Arjun's much-awaited feature film Pushpa – The Rise has finally made it to cinema halls today (December 17). The multilingual action thriller is getting great reviews from the fans, who have once again fallen in love with Allu's acting. The film chronicles the red sanders heist in the hills of Andhra and depicts the convoluted nexus that unfurls in the course of the narrative of a man who is taken by avarice. Also starring Fahadh Faasil, Rashmika Mandanna, the film is written and directed by Sukumar. Pushpa the Rise – Part 1: Anasuya Bharadwaj’s First Look as Dakshayani From Allu Arjun Starrer Fails to Amaze Fans!

Faasil, who is making his debut in Telugu cinema, plays the antagonist in the film. His acting has also impressed everyone who has seen the film till now. He essays the role of an IPS officer named Bhanwar Singh Shekhawat, and is nailing the portrayal. Actor Sunil, Actress Anasuya Bharadwaj, and others also appear in important roles as well. Samantha Ruth Prabhu was also roped in for a special performance. Pushpa: Allu Arjun and Team Gears Up for Solid Promotions Across India.

Produced by Mythri Movie Makers in association with Muttamsetty Media, the film has released in Telugu, Tamil, Hindi, Kannada and Malayalam languages. The film's story is based on real-life incidents from the remote parts of Andhra Pradesh's Chittoor district, making it more relatable for the audience. With such a great response to the first part of the film, everyone is now eagerly waiting for Part 2: Pushpa The Fall.

(The above story first appeared on LatestLY on Dec 17, 2021 12:02 PM IST. For more news and updates on politics, world, sports, entertainment and lifestyle, log on to our website latestly.com).