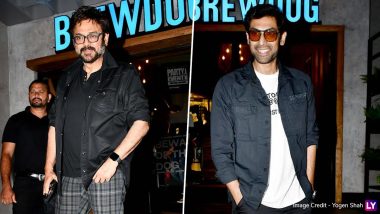 Rana Daggubati, Tollywood's Macho, and his uncle Victory Venkatesh were spotted at a cafe in Mumbai, and photos from their visit have gone viral. Both Telugu actors and Surveen Chawla, who played a character in their upcoming series, were spotted outside a Mumbai restaurant on Thursday night. The 'Rana Naidu' team is said to have had a lavish dinner at the restaurant. Netflix's Rana Naidu Starring Rana Daggubati And Venkatesh, Based On Ray Donovan? Here's All You Need To Know About The Series.

The photos of Venkatesh, Rana, and others have been circulated. Rana and Venkatesh, the uncle-nephew duo, have collaborated on a Telugu web series titled Rana Naidu. The Netflix series, directed by Karan Anshuman and Suparn Verma, recently wrapped up the shooting part. The crime drama is based on the popular American television series Ray Donovan. Rana Daggubati Celebrates 34 Years of Victory Venkatesh in the Telugu Industry With a Special Post!

(The above story first appeared on LatestLY on May 27, 2022 10:44 PM IST. For more news and updates on politics, world, sports, entertainment and lifestyle, log on to our website latestly.com).