Rana Daggubati Celebrates 34 Years of Victory Venkatesh in the Telugu Industry With a Special Post! 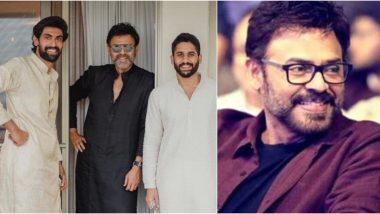 Venkatesh Daggubati aka Victory Venkatesh completed 34 years in the Telugu industry. The actor's debut film Kaliyuga Pandavulu was released on August 14, 1986. Over a span of 34 years, Venkatesh has delivered some of the biggest hits of the Telugu cinema, which include Swarna Kamalam, Prema, Coolie No.1, Chanti, Preminchukundam Raa, Suryavamsam among several others. While fans of the actor had been celebrating his 34 years in the industry, actor Rana Daggubati recently shared a post to congratulate his uncle. The actor shared a picture from his wedding where he standing along with Venkatesh and Naga Chaitanya. Rana Daggubati’s Family Denies Rumours of Actor’s Brother Abhiram Escaping a Car Accident in Manikonda.

The trio look absolutely dapper and we love how Rana decided to congratulate Venkatesh along with a reference to Venky Mama, film starring Naga Chaitanya and Venkatesh together. Sharing the post, Rana wrote, "The Style, The Simplycity, THE VICTORY!!#VenkyMamaTurns34."The post received a lot of love from Venkatesh's fans who have already been trending #VictoryVenkatesh to mark the special day. Venkatesh, Suresh Babu and Rana were also seen in another amazing picture from the Baahubali actor's wedding festivities and this is another amazing snap of Rana and the Venky Mama star together. Rana Daggubati and Miheeka Bajaj Wedding Pics: Here Are the Inside Photos from Tollywood Couple’s Royal Marriage Ceremony!

Venkatesh was last seen in the multi-starrer Venky Mama, also starring Akkineni Naga Chaitanya, Raashi Khann, Paayal Rajput. The actor has Srikanth Addala’s Naarappa in the pipeline next. It is a remake of Dhanush's Tamil hit film Asuran.

(The above story first appeared on LatestLY on Aug 14, 2020 05:37 PM IST. For more news and updates on politics, world, sports, entertainment and lifestyle, log on to our website latestly.com).