Social media was abuzz with news of Rana's engagement and well, Suresh Babu made a statement about the two families meeting up and clarified that there wasn't a ring exchange ceremony. 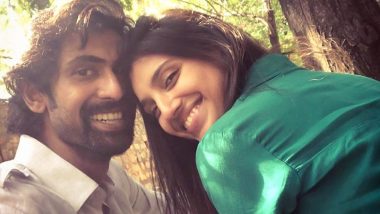 Ever since actor Rana Daggubati introduced his fiance Miheeka Bajaj on social media, fans have been waiting to hear more deets about the wedding celebrations. Recently, speculations were rife that Rana and Miheeka were to exchange rings and have a small engagement ceremony on Wednesday, May 20 but it has now been clarified by his father that it wasn't an engagement ceremony. Social media was abuzz with news of Rana's engagement and well, Suresh Babu made a statement about the two families meeting up and clarified that there wasn't a ring exchange ceremony. Rana Daggubati and Miheeka Bajaj To Get Engaged Today at Hyderabad's Ramanaidu Studios? (Read Details).

In an interaction with Hyderabad Times, Suresh Babu said, "We just met Miheeka’s parents over tea and that is all that happened. No, Rana hasn’t gotten engaged yet." He further added saying that is a usual procedure and said, "It’s a ritual among the Telugus to meet the bride’s parents before fixing the engagement and wedding dates. We are happy to take these alliance talks forward.”

Rana recently made his relationship official on social media and confirmed the duo were to be engaged soon after he posted a picture of the duo and wrote, "She said Yes". Earlier speaking about a potential wedding date, Rana's father had said, "The wedding will happen this year. We were thinking of having it around December, but it could happen even sooner than that too." It's OFFICIAL! Baahubali Actor Rana Daggubati Pops the Question to Girlfriend Miheeka Bajaj and She Says 'YES'.

While Rana is one of the most successful actors in the Telugu industry, Miheeka is reported to be the founder of Drew Drop Design Studio, an event management company. Miheeka doesn't come from a filmy background but does have a close connection with Bollywood actress Sonam Kapoor.

(The above story first appeared on LatestLY on May 21, 2020 11:39 AM IST. For more news and updates on politics, world, sports, entertainment and lifestyle, log on to our website latestly.com).