Baahubali star Rana Daggubati got engaged to his ladylove and event planner Miheeka Bajaj on May 12, 2020. And now, news coming in is that Rana and Miheeka will be getting engaged behind the closed doors of the Ramanaidu studios in Hyderabad, with only close family members in attendance. 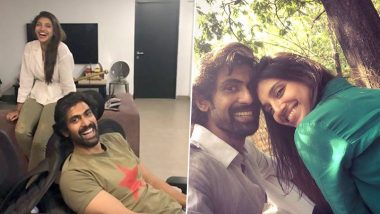 South hunk Rana Daggubati got engaged to his ladylove and event planner Miheeka Bajaj on May 12, 2020. The actor, who has kept mum about his love life and link-ups for a long time, took to social media to announce that he popped the question to Miheeka who said 'yes'. For those who don't know much, Miheeka owns a design studio in Mumbai and is close friends with Sonam Kapoor and sister Rhea Kapoor. Miheeka's mother is a jewellery designer. It's OFFICIAL! Baahubali Actor Rana Daggubati Pops the Question to Girlfriend Miheeka Bajaj and She Says 'YES'.

And now, news coming in states that Rana and Miheeka will be getting engaged behind the closed doors of the Ramanaidu studios in Hyderabad, with only close family members in attendance. No one apart from family is said to be invited for the do, given the social distancing norms in place to help battle COVID-19. As per reports, the couple will have a nischitartham (engagement) today. Rana Daggubati To Marry Miheeka Bajaj: All You Need To Know About Baahubali Actor's Pretty Fiance Who is Also Close Friends With Sonam Kapoor

While reports in greatandhra.com maintained that the pair was getting engaged, it was ABN Andhrajyoti that aired the news first. However, the channel quoted Rana's father Suresh as refuting the news of the engagement. Suresh allegedly told the news channel that the Daggubati and Bajaj families were only meeting today to officially fix the alliance (muhurtams etc.) and finalise other wedding-related details. Rana Daggubati Gets Engaged To Miheeka Bajaj, BFF Sonam Kapoor Says 'He Better Make You Happy' In A Congratulatory Post.

Well, looks like whether or not Rana and Miheeka are getting engaged today, is something we will have to wait and watch out for. Rana's father Suresh had earlier confirmed to the media that both the families had started prepping for the wedding. Revealing that Rana and Miheeka had known each other for a long time, Suresh Babu said, "The wedding will happen this year. We were thinking of having it around December, but it could happen even sooner than that too. We will reveal the details once things are finalised. One thing’s for sure, the kids have given us a nice way to enhance our lockdown productivity. We’ll now be busy planning a wedding." Nevertheless, here's congratulating Rana and Miheeka on their impending nuptials.

(The above story first appeared on LatestLY on May 20, 2020 02:27 PM IST. For more news and updates on politics, world, sports, entertainment and lifestyle, log on to our website latestly.com).