Raja Ravi Varma is considered as one of the greatest painters in the history of Indian art. He was a celebrated Indian painter and artist. A special edition calendar themed on Raja Ravi Varma’s paintings has been released and it features the stunning beauties of south. 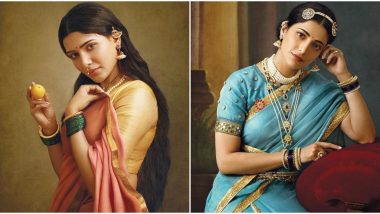 Raja Ravi Varma is considered as one of the greatest painters in the history of Indian art. He was a celebrated Indian painter and artist. His works are known to have fusion of European techniques with a purely Indian sensibility. On February 1, Suhasini Maniratnam (wife of Mani Ratnam) had shared a tweet that read, “Naam charitable trust enters 10th year in February.  We have a surprise on Monday.  Royal classy beautiful and finesse  ...look out”. Well, the surprise has turned out to be totally regal. Samantha Akkineni and R Madhavan’s Pairing in This Commercial Will Make You Want Them Feature in a Film Soon (Watch Video).

A special edition calendar themed on Raja Ravi Varma’s paintings has been released and it features the stunning beauties of south. It includes Samantha Akkineni, Shruti Haasan, Lakshmi Manchu, Khushbu Sundar, Aishwarya Rajessh and few other actresses. The charitable trust NAAM is an NGO founded by Suhasini Maniratnam. These beautiful pictures have been captured by G Venket Ram. If you haven’t seen the photographs yet, you must take a look at them right away. Disney’s Frozen 2: Shruti Haasan to Voice and Sing for Elsa in the Tamil Version (View Pics).

A post shared by Samantha Akkineni (@samantharuthprabhuoffl) on Feb 3, 2020 at 8:37am PST

It was a fantastic experience working with G Venket Ram (@venketramg) and suhasini (@suhasinihasan) for recreating Ravi varma project for NAAM. So glad I could participate in such a meaningful project. pic.twitter.com/lPQoDKDcQD

#NewProfilePic thank you so much #VenkatRam for recreating the magic pic.twitter.com/ok9LCJt3kM

Recreating Ravi Varmas work for NAAM ...feeling blessed thank you @suhasinihasan for this wonderful opportunity and @venketramg your the best.....glad to have been a part of this project...#ravivarmacalendarlaunch2020 thank you @amritha.ram

Talking about this project at the launch event, Suhasini Maniratnam was quoted as saying, “I am always looking for ways to inspire and empower women, and what better way than this homage: a calendar featuring twelve beautiful, graceful Indian women in rich costumes, ornate jewellery and a lavish backdrop,” reports TOI. So what is your take on these pictures? Share your thoughts with us in the comment section below.

(The above story first appeared on LatestLY on Feb 04, 2020 10:44 AM IST. For more news and updates on politics, world, sports, entertainment and lifestyle, log on to our website latestly.com).