On the occasion of Keerthy Suresh’s birthday, Mahesh Babu made it official that the National Award-winning actress is onboard for Sarkaru Vaari Paata. 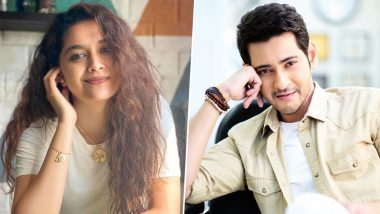 On the occasion of Keerthy Suresh’s birthday, Mahesh Babu made it official that the National Award-winning actress is onboard for Sarkaru Vaari Paata. This is the first time that these two leading stars of South Cinema would be seen opposite each other and fans are already thrilled about it. Now the latest buzz is that Keerthy would be joining the sets of this upcoming flick in January 2021. Sarkaru Vaari Paata: Shooting of Mahesh Babu Starrer to Commence in the US Post Dussehra?

During an interaction with Hyderabad Times, Keerthy Suresh talked about her choice for women-centric films and commercial cinema. The actress shared how she wants to find a balance between the two and what kind of films she plans to zero down in the future. Talking about her role and by when she would join the sets of Sarkaru Vaari Paata, the actress was quoted as saying, “There’s a lot of time for that (role) so I will only reveal more about the film later. There’s time for me to join shooting, I might join in January. All I can say is I’m excited for it.” Mahesh Babu to Play Double Role in Parasuram’s Sarkaru Vaari Paata?

According to a report in Telugu Bulletin, Keerthy Suresh would be seen playing the role of a spoilt brat in Sakaru Vaari Paata. She would reportedly be seen as the most pampered daughter to her parents. However, there is no official announcement on it yet. Directed by Parasuram, the makers are yet to share the release date of the film.

(The above story first appeared on LatestLY on Nov 05, 2020 11:41 AM IST. For more news and updates on politics, world, sports, entertainment and lifestyle, log on to our website latestly.com).