Bakkiyaraj Kannan and Asha are seen all smiles as they pose for the cameras. Besides Sivakarthikeyan, even team Sulthan was present for the ceremony. 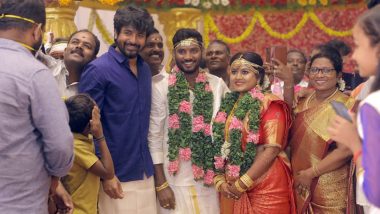 A few days ago director Bakkiyaraj Kannan had shared a post on Instagram in which he mentioned that he would be tying the knot with Asha on October 26 in Chennai. The muhurtham (timing) of the wedding ceremony was mentioned from 6am to 7.30am. Well, the director is happily married to his ladylove and pictures from his wedding ceremony are all over the internet. The wedding was attended by actor Sivakarthikeyan. He had teamed up with the filmmaker for the movie Remo. Sulthan First Look Out! Karthi's Angry Young Man Avatar is a Show Stealer (View Pic).

Bakkiyaraj Kannan and Asha are seen all smiles as they pose for the cameras. The newlyweds were dressed in traditional attires. Besides Sivakarthikeyan, even team Sulthan was present for the ceremony. In fact, the first look of Karthi from this upcoming flick was unveiled at the director’s wedding and that is indeed a special moment. Karthi couldn’t make it for the wedding ceremony. He shared a post for the director that read, “Wishing Bakkiyaraj and Asha a very happy married life! Let the new journey be filled with togetherness, understanding and lots of love! God bless!”

Before Bakkiyaraj Kannan made his directorial debut, he was an associate of director Atlee in Raja Rani. Talking about Sulthan, bankrolled by S R Prabhu under Potential Studios banner, it features Rashmika Mandanna opposite Karthi, marking the actress’ debut in Kollywood.

(The above story first appeared on LatestLY on Oct 28, 2020 04:26 PM IST. For more news and updates on politics, world, sports, entertainment and lifestyle, log on to our website latestly.com).