BTW, on the behalf of the LatestLY desk, we wish Sudeep many many Happy Returns of the Day! 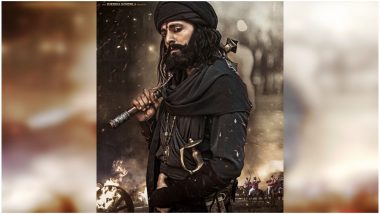 Popular Kannada star Kichcha Sudeep is known among the pan-Indian audiences for his roles in SS Rajamouli's Eega and the first Baahubali movie. He is all set to star in another big period drama in the Telugu film Sye Raa Narasimha Reddy. Based on one of Andhra's first freedom Chiranjeevi in the lead and is produced by his son Ram Charan. Sudeep is having an important role in the film and we now have the first look of his character.

Sudeep celebrates his 45th birthday on September 1 and on the occasion, the makers of Sye Raa Narasimha Reddy have released the first look poster of his character. He is playing Avuku Raju, the ruler of the Auku dynasty whose men revolted against the British along with Narasimha Reddy. That explains the warrior look of the actor in the poster and we must say, that's ferociously awesome!

We also had the teaser of the film coming out a few days and needless to say, it left us stunned by its grand scale! ICYMI, here's the video -

Sye Raa Narasimha Reddy also stars Bollywood legend Amitabh Bachchan, Tamil superstars Nayanthara and Vijay Sethupathi, along with Tamannaah, Pragya Jaiswal and Jagapati Babu. It is reported that an investment of Rs 400 crore has been done in the film, for creating the lavish sets. The movie is all set to release next year.

BTW, on the behalf of the LatestLY desk, we wish Sudeep many many Happy Returns of the Day!

(The above story first appeared on LatestLY on Sep 01, 2018 06:56 PM IST. For more news and updates on politics, world, sports, entertainment and lifestyle, log on to our website latestly.com).