Tamannaah Birthday: From Veeram To Baahubali, 5 Biggest Hits Of The South Beauty You Must Watch!

Tamannaah, born on December 21, 1989, is mainly known for her works in Telugu, Tamil and Hindi films. She had made her acting debut at the age of 15 with the film Chaand Sa Roshan Chehra. 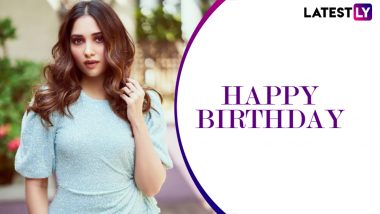 Tamannaah, born on December 21, 1989, is mainly known for her works in Telugu, Tamil and Hindi films. She had made her acting debut at the age of 15 with the film Chaand Sa Roshan Chehra and since then there has been no looking back. It wasn’t an easy journey for her in the world of cinema, however, this south beauty is today one of the most sought after actresses. With her acting and dance skills, she has won hearts of filmmakers, producers and the movie buffs. Tamannaah Bhatia Birthday Special: Perennially and Seamlessly Flipping From Being Girly and Flirty to Edgy and Chic!

Tamannaah has done quite a few successful films in her career. Veeram, Baahubali are some among them. “I want to be part of films which do well and if I can make a difference, then that’s great. Every time people write me off, I’m thrilled because it pushes me to work harder,” Tamannaah once said, reports Vogue. On the occasion of her birthday, let’s take a look at some of her biggest hits. F3: Tamannaah Bhatia, Varun Konidela Begin Shoot of Their Upcoming Comedy Drama! (View Pics).

Kalloori – Tamannaah had got a major breakthrough in Tamil Cinema with this Balaji Shakthivel directorial. She played the role of a college student named Shobana who hailed from a small town in Tamil Nadu. The story of this film is inspired on a real-life incident, the 2000 Dharmapuri bus burning incident.

Veeram – The beauty was paired opposite Thala Ajith in this film helmed by Siva. The film was labelled as not just as a mass entertainer and praised for the lead actors’ performances, but it was also a huge hit at the box office.

Baahubali: The Beginning – Her role as a skilled warrior and a fighter of the rebel group, Avanthika, and her chemistry with Shivudu (played by Prabhas) grabbed audiences’ attention. The actress had undergone major transformation to play this character.

Oopiri – The Vamshi Paidipally comedy-drama marked Tamannaah’s reunion with Karthi on the big screen after a long time. It is a remake of the French film titled The Intouchables that had released in 2011.

Sye Raa Narasimha Reddy – The gorgeous actress played the role of a temple dancer, Lakshmi, who falls in love with Narasimha Reddy (played by Chiranjeevi). Although Tamannaah had only limited screen time, she put up a fabulous and engaging performance.

These are some of the hit films and roles in Tamannaah’s credits. Here’s wishing the beauty a very happy birthday and many more blockbuster projects!

(The above story first appeared on LatestLY on Dec 21, 2020 09:20 AM IST. For more news and updates on politics, world, sports, entertainment and lifestyle, log on to our website latestly.com).