Thalaivar 168: After Darbar, Nayanthara and Rajinikanth to Team Up Again, Makers Confirm 'Lady Superstar' as the New Addition to the Cast

We are sure this latest addition is going to make the megastar's fans go crazy. The announcement of Lady superstar joining the film was made by the production house on Friday, January 31. 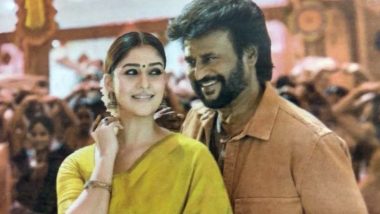 Rajinikanth was last seen in director AR Murugadoss's Darbar, which kicked off 2020 on a good note for the superstar after it released on January 9. In the film, he was paired opposite Nayanthara and fans went gaga over their pairing in the film. Now, the favourite duo is all set to join hands yet again for his next film which is currently being called Thalaivar 168. The film also stars other leading actresses such as Keerthy Suresh, Khushbu Sundar and Meena. We are sure this latest addition is going to make the megastar's fans go crazy.The announcement of Lady superstar joining the film was made by the production house on Friday, January 31. Thalaivar 168: Keerthy Suresh Joins Rajinikanth in His Next Big Release.

Sun Pictures took to Twitter to share the exciting news with a video message, where they announced that actress Nayanthara will be joining the team of Thalaivar 168. Their Twitter handle wrote, "Lady Superstar #Nayanthara joins the cast of #Thalaivar168."Apart from these actresses, the film also stars Prakash Raj and Soori in pivotal roles.

According to reports, Keerthy Suresh will play Rajinikanth's daughter in the film. However, an official confirmation on the same is yet to be made by the makers. Considering how hit the Nayanthara-Rajinikanth combo is, the Darbar actress may essay the role of his lady love. Thalaivar 168, is being touted to be a rural entertainer and we can't wait to get a glimpse of a first look soon.

(The above story first appeared on LatestLY on Jan 31, 2020 09:07 PM IST. For more news and updates on politics, world, sports, entertainment and lifestyle, log on to our website latestly.com).