Starring Vijay and Rashmika Mandanna, Varisu is being produced by Dil Raju under the banner of Venkateswara Creations. 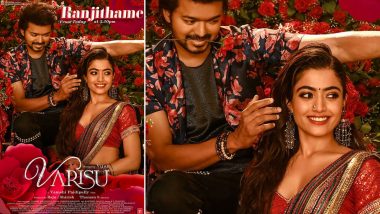 The Animal Welfare Board of India (AWBI) has issued a show cause notice to makers of upcoming Tamil movie Varisu for using five elephants without obtaining the mandatory permissions. Acting on a private complaint, the AWBI issued the notice to Hyderabad-based Venkateswara Creations for using elephants without the pre-shoot permission from the Board.

AWBI Secretary S. K Dutta stated in the notice dated November 23 that the filmmaker has violated Performing Animals (Registration) Rules, 2001. Under the rules, every person has to register with the Board if the animals are being exhibited or trained. Vijay Deverakonda and Rashmika Mandanna Got Married? Morphed Pic of the Actors as Newlyweds is Going Viral!

According to the notice, the Board had not received the pre-shoot application from Venkateswara Creations. Exhibiting the animals without the permission of the Board is an offense under Section 26 of the Prevention of Cruelty to Animals Act, 1960.

The Board has directed Venkateswara Creations to submit a full and comprehensive explanation of the violations within seven days, failing which the Board would take any action as it may deem to consider proper and necessary for the welfare of the animals.

Elephants are protected under Schedule-I of the Wildlife Protection Act, 1972, and obtaining prior permission for using performing animals in films is mandatory as per Rule 7(2) of the Performing Animals (Registration) Rules, 2001.

However, the production house reportedly did not consult the Board, except for obtaining a transit permit from the Chief Wildlife Warden's office.

(The above story first appeared on LatestLY on Nov 24, 2022 07:02 PM IST. For more news and updates on politics, world, sports, entertainment and lifestyle, log on to our website latestly.com).