Vikram is produced under the banner of Raaj Kamal Films International. Ahead of this action thriller’s release, let’s take a look at some of the key details of this Tamil movie. 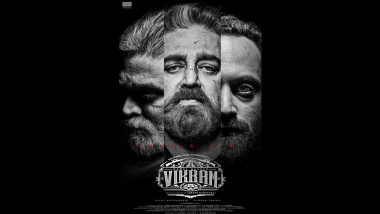 Vikram, written and directed by Lokesh Kanagaraj, is just a day away from its theatrical release. It is one of the most-anticipated movie releases of the year as it features the finest actors together – Kamal Haasan, Vijay Sethupathi and Fahadh Faasil. It is the first time that the trio would be sharing screen space and fans are extremely thrilled about to watch them together on the big screen. Ace composer Anirudh Ravichander has composed the film’s music. Vikram: Lokesh Kanagaraj Shares Suriya’s Intense First Look Poster From Kamal Haasan’s Actioner.

Vikram is produced under the banner of Raaj Kamal Films International. Ahead of this action thriller’s release, let’s take a look at some of the key details of this Tamil movie.

Cast – The film stars Kamal Haasan, Vijay Sethupathi and Fahadh Faasil in the lead. Narain, Antony Varghese, Gayathrie Shankar, Arjun Das, Chemban Vinod Jose among other would be seen in key roles. Suriya too would be making a cameo appearance.

Plot – Haasan, who is playing the titular role, is seen essaying the role of a retired police official. Vikram is assigned to save the life of a high ranking government official who has been kidnapped by two siblings, in which one is a gangster and the other a politician. How Vikram manages to accomplish this mission forms the rest of the story.

Watch The Trailer Of Vikram Below:

Reviews – Vikram reviews are out. Click here to read what Sreeju Sudhakaran of LatestLY has to say on Kamal Haasan, Vijay Sethupathi and Fahadh Faasil's film.

(The above story first appeared on LatestLY on Jun 02, 2022 09:28 AM IST. For more news and updates on politics, world, sports, entertainment and lifestyle, log on to our website latestly.com).