Vikram is a Tamil action potboiler, that is written and directed by Lokesh Kanagaraj. The movie stars Kamal Haasan, Vijay Sethupathi, Fahadh Faasil, Kalidas Jayaram, Narain, Chemban Vinod with Suriya in a cameo. 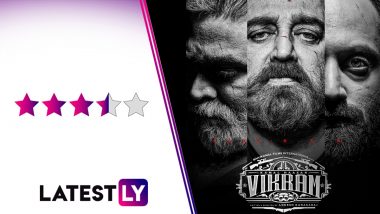 Vikram Movie Review: Thanks to Marvel, now everyone is into making their own cinematic universes. In India, we have Rohit Shetty trying to make his cop-verse, and now Lokesh Kanagaraj is making his own Kaithi-verse with his assorted heroes and a villain who is going to challenge them all. Who is not Vijay Sethupathi by the way. But before we get to that Avengers-like event of Kollywood, let's first talk about Vikram, that marks the return of the great Kamal Haasan to the big screen after a gap of four years. Considering his last film before this gap was the terrible Vishwaroopam II, it's a near cruelty to his fans that he took four years to make amends for that travesty. Vikram Title Track: This Song From Lokesh Kanagaraj’s Film Features Kamal Haasan as a Strong and Powerful Man!

So does Vikram become the movie that manages to make those amends? Sure, it does. I could say, it even makes up for the disappointment that I felt about Kanagaraj's last release before this, Thalapathy Vijay's Master. That said, Vikram doesn't exactly come to the same level of masterful thrill as LK's fantastic Kaithi, even though the third act of the underwhelming second half tries hard to do so. But even when the second half doesn't manage to keep up with the writing of the first half, it still offers quite a few thrills on the way. Especially 'Agent Tina'! Easily the most surprising scene of the movie, just watch out for her!

So what's the plot about? When we meet Kamal Haasan first in the movie, he is Karnan. And to our complete surprise, he is killed within 10 minutes of the movie by a group of masked men! To investigate his murder and two others, the police chief Jose (Chemban Vinod) brings in a sleeper cell team in the government, led by Amar (Fahadh Faasil). Amar's investigations into why the masked men killed a rando like Karnan, when the other two victims are from the police department, gets more and more intriguing when he finds that Karnan had so many conflicting facets about him.

His investigations also lead to Sandhanam (Vijay Sethupathi), a ruthless ganglord, who is after the men who absconded with his drugs consignment. All these forces clash into an exciting pre-interval sequence, that brings in the 'ghost' who has matters to settle with some baddies.

Vikram is Lokesh Kanagaraj getting his groove from Kathi back after losing it somewhere in creating a superstar vehicle for Thalapathy with Master. Like I said before, the first half of Vikram is quite good thanks to a banger of an opening act, Amar's investigation track and when the movie manages to create an apprehensive aura around Sandhanam. There is some lag here and there, but LK keeps the narrative gripping enough. The Kaithi callbacks will be enjoyed by the fans, made more relevant by Narain's character. Interestingly, Kamal Haasan is sparingly used in these portions, and while you do miss him, it doesn't affect your interest much with what's going on. Vikram: Fan Poses With 60 Tickets He Brought for Kamal Haasan, Vijay Sethupathi and Fahadh Faasil’s Film.

The pre-interval sequence is quite explosive even though the revelation that it brings is easily predictable. Which doesn't mean Ulaganayagan doesn't rock here; he does and in swag, and I was pretty excited to see what he brings to the game.

The second half is where things get a bit dim. While Lokesh Kanagaraj doesn't compromise on his craft or make it a total Kamal Haasan show, there is a lack of freshness in the writing here, and Fahadh Faasil and Vijay Sethupathi's characters also take some beating in terms of scope and exposure. The flaw here is when Vikram tries to repeat the same trick as Kaitihi but doesn't reach that brilliance, though there are plenty of stylish flourishes. I wish there were more smart surprises like the whole 'Agent Tina' scene, but while the film is gripping still, little disappointed that the setup of the first half isn't fulfilled to the full extent here.

A primary reason for that is Vikram trying to bring the same dramatic context that Dill shared with his daughter in Kaithi, to Vikram's hero's relationship with his infant grandson, but doesn't have the same warmth 'cos it isn't well-developed. There are also plenty of loopholes and logical fallacies. Like, Amar's career has him making sure that his lover (Gayathrie Shankar) is not aware of what he does, but still he keeps her around in the same place where he keeps his captives to interrogate. Also, I was oblivious to how he managed to place 30kgs of RDX in the villain's much-guarded house, without anyone noticing. Even Kamal's 'death' is explained through convenient editing, something which I don't really like much. In fact, I wish there was more editing done to keep the runtime in check. Vikram Star Kamal Haasan To Team Up With Take Off Fame Director Mahesh Narayanan For His Next!

However, excitement returns in Vikram's sequel tease that brings in Suriya's much talked about cameo and the promise of carnage that he will bring in the sequel.

As for the performances, Kamal Haasan returns in full swag and mass mode here, though the role offers less in terms for the master actor in him to truly shine. Still it is fun to see him kick a$$ in style! Fahadh Faasil holds the first half well together with a solid act, but the character loses steam in the second half. Vijay Sethupathi plays a more neurotic version of the character he did in Master, and while there is some fun in him doing bad things with bits of humour, especially his intro sequence and the pre-interval portion, he also suffers from the weak writing in the second half, turning him into an acolyte to be done away with before we meet the big baddie. Chemban Vinod is decent enough.

Anirudh Ravichander's background score is a major highlight, his "Vikram" piece is rousing and thrilling.

- A Thrilling First Half

- Quite a Few Thrills

- A Weaker Second Half

Vikram might not be in the same league as Kaithi, but it is a worthy followup to Kanagaraj's hit thriller and does an intriguing expansion to his universe. What's more, it returns Kamal Haasan on the big screen in mass mode, but doesn't compromise on the narrative to focus more on the superstar. A better-written and edited second half would have elevated Vikram to greater heights., but still it never fails to surprise and thrill.

(The above story first appeared on LatestLY on Jun 03, 2022 03:11 PM IST. For more news and updates on politics, world, sports, entertainment and lifestyle, log on to our website latestly.com).