Yash Birthday: From Modalasala To KGF, 5 Blockbusters Of The Kannada Superstar That Are A Must Watch

Yash, who celebrates his 36th birthday today, had made his acting debut with television serials and not films. He made his debut in the film industry 2008 with Moggina Manasu in which he was seen in a supporting role. 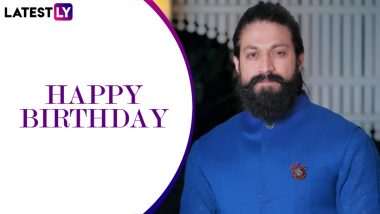 Yash, the superstar of Kannada Cinema, has fans across the country. Fans wait for his films to release and celebrate it on a large scale. One of the most-awaited films of his is KGF: Chapter 2. The film is scheduled to be released in theatres in April, but due to the ongoing situation and the rising number of cases, we wonder if the makers would stick to the original date or reschedule it. But never mind, one can still go back and watch the previous films of Yash that were a huge hit and on this birthday, we’ll list down those five films that every fan of this handsome hunk must watch. KGF Chapter 2: Teaser of Yash's Film Garners More than 200 Million Views; Director Prashant Neel Thanks Fans on Twitter.

Yash, who celebrates his 36th birthday today, had made his acting debut with television serials and not films. He made his debut in the film industry in 2008 with Moggina Manasu in which he was seen in a supporting role. His first commercial solo hit happened two years later with Modalasala and then there were a series of commercially successful films in his kitty. On the occasion of his special day, let’s take a look at some of those blockbuster movies that starred Yash.

Kirataka – It was special for Yash because it was reportedly the 3000th Kannada movie to be released. It was a remake of the Tamil film titled Kalavani. Yash is seen as a road side romeo in this film helmed by Pradeep Raj.

Mr and Mrs Ramachari – The now real life couple, Yash and Radhika Pandit, had starred together in this movie directed by Santhosh Ananddram. Yash’s character is a hot-headed individual, whereas Radhika’s character is shown as a damsel in distress.

Masterpiece – Yash’s looks and dialogues in the action thriller were applauded by critics and fans. His character was showcased as a rowdy and it was something different that the audience got to watch.

KGF: Chapter 1 – His role as Rocky, Mumbai’s high-ranking assassin, was praised by critics. From the film’s grand set, the direction, gripping story and performances of the star cast, everything about it was hailed. It emerged as the highest grossing film in Sandalwood by collecting over Rs 250 crore.

These are some of his commercially successfully films. One just can’t wait for the release of KGF: Chapter 2 and wait to see how it shatters box office records. Here’s wishing the superstar of Kannada Cinema, Yash, a very happy birthday!

(The above story first appeared on LatestLY on Jan 08, 2022 12:01 AM IST. For more news and updates on politics, world, sports, entertainment and lifestyle, log on to our website latestly.com).