Film theatres in Telangana re-opened on Friday after a hiatus of more than three months. Majority of about 600 theaters across the state re-opened with 100 per cent seating capacity. 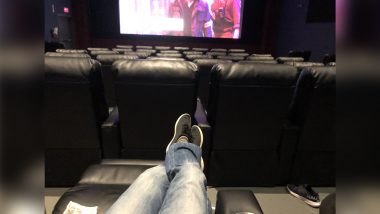 Film theatres in Telangana re-opened on Friday after a hiatus of more than three months. Majority of about 600 theaters across the state re-opened with 100 per cent seating capacity. The theaters resumed business with the screening of three new Telugu films - "Thimmarusu", starring Satyadev and Priyanka Jawalkar, "Ishq - Not a Love Story", starring Teja Sajja and Priya Prakash Varrier, and "Narasimhapuram" starring Nandakishore and Siri Hanumantu. Delhi Cinema Halls Allowed to Run in 50% Capacity From July 26; Audiences Have to Wait for Hindi Releases till August 15.

The first day saw a dull start as few cinema lovers turned out. However, the exhibitors expect the numbers to go up over next few days. In Greater Hyderabad which has 160 theatres, single-screen theaters saw poor turnout while there was some activity at multiplexes. INOX said it welcomed movie lovers at Hyderabad INOX at GVK One, Banjara Hills, and Maheshwari Parameshwari Mall. It said cinemas will be operated by a full vaccinated team and it is adhering to each and every instruction as prescribed in the notifications issued by the state government. Madhya Pradesh Cine Association Seeks Tax Waiver For Cinema Halls in the State.

"We have curated a hygiene initiative called #SafetyFirst, which is a convergence of the measures prescribed by the government authorities and additional measures implemented by us. Besides the cinemas will be frequently deep cleaned and disinfection of all customer touch points including entrance, box office, lobbies, auditorium, F&B counters, restrooms and exit gates will be carried out," it said. "In an endeavour to provide enhanced hygiene, the protocols like mandatory mask, temperature check, e-tickets, contactless payment and entry and enhanced intake of fresh air have also been implemented," it added.

Though the state government had lifted the lockdown and night curfew last month, the owners of cinema theatres did not resume the business immediately. They had presented few demands before the government to overcome the huge losses they suffered since last year due to Covid-19 induced lockdowns. The government has agreed to allow theatres to collect parking fee. Theaters have remained shut for nearly 12 months since the outbreak of Covid-19 pandemic and imposition of lockdown in March last year.

It was on November 23 that the Telangana government had permitted theatres in areas outside the containment zones to reopen with up to 50 of their seating capacity. However, the business had remained dull due to fear of Covid. In February this year, theaters were allowed to operate at 100 per cent capacity. Just as the film industry was trying to come out of the crisis, the second wave pushed it into further losses. Most of the theaters downed shutters in April.

The exhibitors hope that there will be no third wave of the pandemic. According to film industry sources, more than 20 Telugu films are waiting to be released in August-September. S.S. Rajamouli's much-awaited "RRR" starring Junior NTR and Ram Charan is expected to be released on October 13.

(The above story first appeared on LatestLY on Jul 30, 2021 06:29 PM IST. For more news and updates on politics, world, sports, entertainment and lifestyle, log on to our website latestly.com).