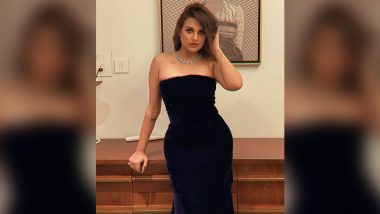 It was a few days back when Bigg Boss 13 fame Himanshi Khurana had informed her fans via social media that she has been tested positive for coronavirus. In her long post, she had also urged people who came in contact with her to get tested and take care of oneself. Well, after being diagnosed with COVID-19, the singer was home quarantined as suggested by the doctors. However, now as per an exclusive report on Spotboye, we hear that Khurana has been hospitalised. The report hints that her health went for a toss and so she was rushed to a hospital in Ludhiana (Punjab). Himanshi Khurana, Former Bigg Boss Contestant, Tests Positive For COVID-19.

As per the portal, Himanshi was down with 105-degree fever and her oxygen saturation also got low and so she was admitted. "Himanshi who got tested positive for Covid-19 on Saturday evening was home quarantined but this morning she had to rush to the hospital as her oxygen saturation level went really low and she had 105 temperature. Hence via ambulance the actress had to shift from Chandigarh to Ludhiana. And now she is under doctor's observation," a source told the portal. Arjun Rampal Quarantined At Home After Co-Stars Manav Kaul And Anand Tiwari Test Positive For COVID-19 On The Sets Of ‘Nail Polish’.

Himanshi  Khurana along with other prominent celebs like Sidhu Moosewala, Diljit Dosanjh, Babbu Mann, Gippy Grewal, Parmish Verma and Ammy Virk had joined a protest in Punjab with regards to the farmers bills that have been passed by the parliament. Well, all we wish is that Khurana recovers soon. Stay tuned!

(The above story first appeared on LatestLY on Sep 30, 2020 08:48 AM IST. For more news and updates on politics, world, sports, entertainment and lifestyle, log on to our website latestly.com).