This TV actor feels Rhea Chakraborty should enter Bigg Boss house to clear all the allegations that were hurled at her during Sushant Singh Rajput's death investigation. 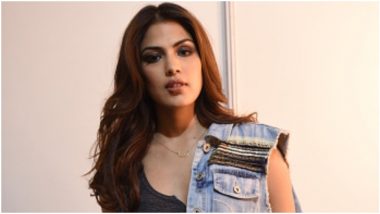 If and when it happens, we can assure you Bigg Boss will break all its previous TRP records. Imagine Rhea Chakraborty, the most discussed Indian name in 2020 entering BB house as a contestant! Even the ones who aren't ardent fans of the show will start watching it simply to understand and realise if she has anything gossipy to say. While the chances of her entering Bigg Boss 14 house are extremely bleak, there may come a time in future when she decides to step in to clear her name. And TV actor Suraj Kakkar feels she'd be the right candidate. Bigg Boss 14: Sidharth Shukla Calls Rubina Dilaik Selectively Dumb, Feels She Is Less Entertaining Than Eijaz Khan (Watch Video).

When Suraj in his recent interaction with TellyChakkar was asked to name a contestant who he wants to see inside Bigg Boss house, he named Rhea as his answer. “For obvious reasons, I want to see Rhea Chakraborty in the show, if anyone gives her a chance. There is a lot of confusion about her relationship with Sushant, her deeds…a lot of accusations are on her. When you are in a show like Bigg Boss, you are constantly on camera. The camera captures your every move and I feel you cannot fake it 24/7. It will be great for everyone to see who she truly is,” he said while explaining his choice. Bigg Boss 14: Manu Punjabi Unmasks Rubina Dilaik and Abhinav Shukla’s Lie of Not Following the Reality Show’s Previous Seasons With Proof (Watch Video).

The actress who's out on a bail is leading a war on multiple fronts. Besides asking CBI to investigate her neighbour who wrongfully claimed that SSR had dropped Rhea to her apartment, a night before his death, Rhea is also trying hard for her brother's bail application. Bigg Boss meanwhile is going on in full swing with seniors Sidharth Shukla, Gauahar Khan and Hina Khan inside the house.

(The above story first appeared on LatestLY on Oct 19, 2020 07:53 PM IST. For more news and updates on politics, world, sports, entertainment and lifestyle, log on to our website latestly.com).