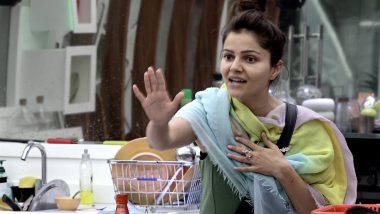 Another Bigg Boss 14 Weekend Ka Vaar is upon us. Salman Khan did not turn up Saturday, for the reasons best known to the channel. Rumour has it that Weekend Ka Vaar will take place over Saturday and Monday. Well, in the promo for the Saturday's episode we see Rubina Dilaik going at war with Bigg Boss. Rubina is unhappy that Bigg Boss was allegedly derogatory towards the freshers. She opts out of Weekend Ka Vaar. Salman Khan lashes out at Rubina. He tells her if she has so much of a problem then she should leave. Bigg Boss 14 October 17 Episode: Rahul and Jaan's Sing-Off, Hina Calls Rubina a Winner - 5 Highlights of BB 14.

Well, this is not the first time when a contestant has took a stand against Bigg Boss. In season 7, Gauahar Khan walked out the show when she did not agree with a decision. She not only came back but also won the show that season. We hope she gets where Rubina is coming from. Although, Salman says that "insult to abhi hui hi nahi".

Gauahar and Hina had praised Rubina on the last episode. They said that they saw a winner in Rubina. But Sidharth Shukla disagreed. Bigg Boss 14 October 16 Episode: Sidharth Shukla Roars, Jasmin Bhasin Wins Against Nikki Tamboli - 5 Highlights from BB 14.

Speaking of Sidharth, he will also get an earful from Salman, reportedly. Salman will question why was he biased towards Nikki Tamboli when Jasmin clearly had more water in her glass at the end of the immunity task.

Salman will also reprimand Rahul Vaidya for using the ageist language for Eijaz Khan. Well, and, of course, one of the contestants will make an exit from the show. Jaan Kumar Sanu's father Kumar Sanu has tested positive for COVID-19 so he might also receive the news.

(The above story first appeared on LatestLY on Oct 17, 2020 11:09 PM IST. For more news and updates on politics, world, sports, entertainment and lifestyle, log on to our website latestly.com).