Rakhi's brother has informed that her mother will now be undergoing chemotherapy as she has been detected with a tumour in her gallbladder which is cancerous. 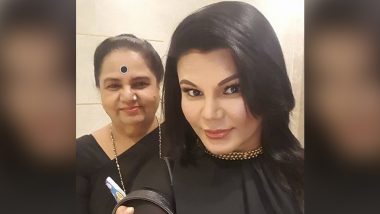 Rakhi Sawant might be entertaining everyone with her unusual antics in the Bigg Boss 14 house, but we all felt awful when we saw her interacting with her mother through a video call during the Family interaction episode. Rakhi's mother had then informed that she is ill and has been admitted to the hospital for treatment and Rakhi felt really bad for not being able to help her mother.  Rakhi had promised to fast for her mom and pray for her health as well and was so heartbroken that even the house members began to cry for her. Rakhi Sawant's Brother Reveals Their Mother Will Undergo Surgery For Abdominal Cancer, Says He Hopes Rakhi Comes Back To See Their Mother In A Healthy Condition.

While Rakhi might have recovered from this episode, her mother's health is deteriorating day by day.  Rakhi's brother has informed that her mother will now be undergoing chemotherapy as she has been detected with a tumour in her gallbladder which is cancerous. Our mother is in the hospital. She was operated upon on Saturday. She has a huge tumour in her gallbladder, which is cancerous and can't be operated upon. Now the doctors will start the chemotherapy from Monday onwards. We are praying that everything goes on fine and she recovers quickly," Rakhi's brother Rakesh told E!Times.

"Yes, we had informed the makers of the show and they have in turn informed Rakhi about the same on Saturday. It is my mother's wish only that Rakhi should continue to stay inside the Bigg Boss house and should emerge the winner. She is really happy with her game and even saw the Friday episode. She is happy that Rakhi is successfully playing her second innings in her career. Mother is really proud of Rakhi," he further added. Rakhi Sawant's Mother Reveals Her Son-In-Law Ritesh Will Soon Come To India And Accept Rakhi As His Wife.

As for Rakhi's performance in the house, she is grabbing eyeballs for her increasing fondness towards Abhinav. In one of the episodes, she was seen roaming around the house with "I Love Abhinav" written all over her body. She even had torn his underwear with a pair of scissors and pulled the string of his shorts to annoy him. Salman took a case of Rakhi and told her to not cross her limit.

(The above story first appeared on LatestLY on Jan 31, 2021 06:44 PM IST. For more news and updates on politics, world, sports, entertainment and lifestyle, log on to our website latestly.com).