Black-ish Episode on Police Brutality to Be Re-aired by ABC Amid George Floyd Protests; Showrunner Says, 'This Episode Feels Just As Timely As It Did Then' 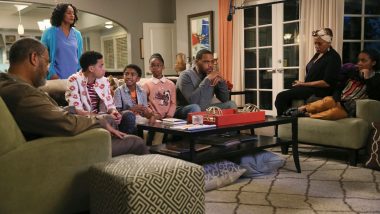 Nationwide protests arose in US as people took to the streets to protest against racism and police brutality in the wake of the death of George Floyd in Minneapolis. Protestors took to the streets to show their support for the Black Lives Matter movement and to take a stand against racism. Several celebrities also joined these protests and a few others took to social media to condemn police brutality. In the midst of this, on Blackout Tuesday, a day of reflection for the entertainment industry in the aftermath of George Floyd’s death, ABC decided to rebroadcast two of its most powerful episodes of comedy-drama Black-ish. The episodes of ‘Hope’ and ‘Juneteenth’ were chosen by the network given their pertinent message in the current times. #BlackOutTuesday: Emilia Clarke, Chris Hemsworth and Other Celebs Share Black Background Photos in Support Of the Black Lives Matter Movement (View Pics).

"Hope" particularly has been an episode that is most relevant to what is happening today. The episode centres around the characters of the youngest twins, Jack and Diane, and how their parents explain to them police brutality against Black people. Sharing a post about the re-airing of these episodes, showrunner Kenya Barris wrote, "It was inspired by conversations I was having with my own children about the countless examples of systematic oppression happening around them."Jamie Foxx, Ariana Grande, Michael B Jordan and Other Celebs Who Joined Protests Over the Death Of George Floyd in US.

Here's a Glimpse of the Episode From the Show:

The episode originally aired in February 2016. Another episode of the show that has been chosen by the network for a re-telecast is "Juneteenth" that features musical numbers about the holiday that marks the end of slavery in Texas.

(The above story first appeared on LatestLY on Jun 03, 2020 10:32 AM IST. For more news and updates on politics, world, sports, entertainment and lifestyle, log on to our website latestly.com).