ALT Balaji's web show Broken But Beautiful has been a fan favourite since quite a long time. On December 3, the lead stars of its third season were announced and its none other Sidharth Shukla paired opposite Sonia Rathee for the romantic story. Check it out. 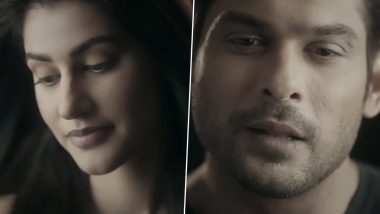 ALT Balaji's web show Broken But Beautiful has been a fan favourite since quite a long time. However, admirers of the series were upset after Ekta Kapoor revealed that Vikrant Massey (Veer) and Harleen Sethi (Sameera) will no more be part of season three as new leads will kickstart the third season. Earlier, reports were that Sidharth Shukla has been roped in to play the male lead on the show and well it was cent percent true. As the first teaser of Broken But Beautiful 3 dropped online which sees the Bigg Boss 13 winner in it. Broken But Beautiful: Ekta Kapoor Confirms Vikrant Massey and Harleen Sethi Won't Return to the Show, Asks Fans to Nominate a Jodi for Season 3.

In the teaser, we see Sid along with Sonia Rathee, who happens to be the leading lady of the love story. The two are named Agastya and Rumi. Well, we bet after this Sidharth's fans will be on cloud nine. The video does not leak anything much about the plot, but the leads can be seen singing the title track 'Yeh Kya Hua'. Sid and Sonia look stunning in the monochrome themed clip. Sidharth Shukla Bags The Male Lead Role In Ekta Kapoor's Broken But Beautiful Season 3? (Deets Inside).

Details about the show's story, cast and more will be out soon. However, it will be interesting to see how Sonia Rathee and Sidharth's chemistry will look like. Are you excited about Broken But Beautiful 3? Tell us in the comment section below. Stay tuned!

(The above story first appeared on LatestLY on Dec 03, 2020 06:52 PM IST. For more news and updates on politics, world, sports, entertainment and lifestyle, log on to our website latestly.com).