Yes, Vikrant Massey and Harleen Sethi aka Veer and Sameera won't return for Broken but Beautiful season 3. Ekta Kapoor has meanwhile asked for suggestions who could replace this adorable pair in the show's next season. 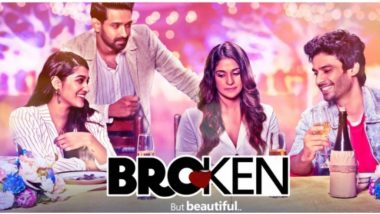 For the ones who willingly followed ALTBalaji's Broken but Beautiful would be feeling sad after hearing this new update. The show's original couple, Vikrant Massey and Harleen Sethi aka Veer and Sameera won't be returning for the show's next season and the same has been confirmed by Ekta Kapoor. So you see, we aren't playing with your emotions but lending you a shoulder to cry on. The season got popular with time and the pair's unconventional chemistry was able to woo the audiences. Broken But Beautiful Season 2 Review: Vikrant Massey and Harleen Sethi’s Twisted Love Tale Will Undo the Knots of Your Heart!

However, as they say, all good things should come to an end. Kapoor believes that Veer and Sameera's story has come to an end and it completed its beautiful arc. Hence it makes no sense to ask them to return for season 3. Meanwhile, the show must go on and the new season is already in the making from their end. Of course, the producers are still hunting for a new pair and Ekta has asked in for some suggestions. The TV Czarina took to her social media account to ask her fans and admirers to suggest her some new names who could be a part of Broken but Beautiful's season 3. Broken But Beautiful Song Teri Hogaiyaan: Vikrant Massey and Harleen Sethi's Latest Track Hits All the Right Chords (Watch Video).

The time has come to break ths heartbreaking news ! While we have commissioned d next season of #brokenbutbeautiful it will NOT HAVE VEER N SAMEERA ( although @itsharleensethi n @vikrantmassey87 we r not letting go off u both so easily ...we will lure u in our films n maybe web again ) it’s not a daily soap n their story ends here without unnecessary twists ....but here’s d QUESTION! WHICH PAIR WUD U WANT IN THE THIRD N NEW INSTALMENT OF #brokenbutbeautiful

The announcement certainly prompted the SidNaaz fans to start a trend suggesting their names for the show's next season. Meanwhile, Sidharth Shukla's fans are eager to see him pair up with Jennifer Winget as they think the duo will make for a handsome pair. While we do like their choices, do you have any other suggestion? Do send in your names and options by tweeting to us @latestly.

(The above story first appeared on LatestLY on Apr 26, 2020 07:22 PM IST. For more news and updates on politics, world, sports, entertainment and lifestyle, log on to our website latestly.com).