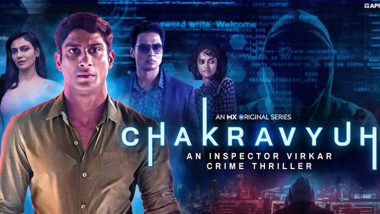 Prateik Babbar plays an angry young police officer in the upcoming web series Chakravyuh: An Inspector Virkar Crime Thriller. He hopes to showcase his versatility as an actor in the role of a cop. "I'm hoping to showcase my versatility as an actor with the eccentric Virkar. The series sees my character in a constant chase against time, trying to stay ahead of a ruthless blackmailer and not allowing the wrong to overpower the truth. Chakravyuh Trailer Review: Prateik Babbar As Inspector Virkar Dives Deep Into the World of Dark Web To Catch a Wanted Cyber Criminal (Watch Video).

Virkar is a cop who fights for the right in his own unique way -- many times steering away from the rule book. He will go to any extent to follow the truth," said Prateik. The story of the series is of an angry cop with his own brand of justice, who stumbles upon a ghastly murder. India Lockdown: Prateik Babbar, Shweta Basu Prasad, Aahana Kumra to Star in Madhur Bhandarkar’s Social-Drama.

Directed by Sajit Warrior, the series also features Simran Kaur Mundi who said: "This psychological drama is very relevant in today's day and age as it highlights current issues such as the dark side of social media including cyber crime." The eight episode series also features Ruhi Singh, Ashish Vidyarthi, Shiv Panditt, Gopal Datt and Asif Basra in pivotal roles, and it streams on MX Player from March 12.

(The above story first appeared on LatestLY on Mar 02, 2021 11:48 AM IST. For more news and updates on politics, world, sports, entertainment and lifestyle, log on to our website latestly.com).