Did You Know That Shivangi Joshi Had Played A Cameo In Rupali Ganguly's Parvarrish – Kuchh Khattee Kuchh Meethi? 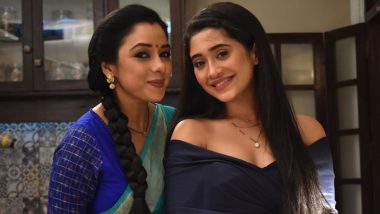 While Shivangi Joshi has already become a household name with her stint as Naira in Yeh Rishta Kya Kehlata Hai, another popular face Rupali Ganguly will soon be making her television comeback on the small screen with her new show Anupamaa. And though they're both different personalities performing on different shows, that did not stop them to speak highly of each other. And guess what? Their association dates back to the time when Rupali played the lead in Parvarrish – Kuchh Khattee Kuchh Meethi and Shivangi played a cameo. "The most special bond that we have in common is Rajan Shahi - the man who introduced us both to this beautiful world of television. I have realised that the whole DKP team is one, no matter which shows you belong to," said the ladies. Yeh Rishtey Hain Pyaar Ke and Anupamaa Undergo Timeslot Changes, Yeh Rishta Kya Kehlata Hai Remains Unchanged (Deets Inside).

Shivangi shared that she has grown up watching Rupali's show and recalled that she even has a pic with the actress that she took nine years ago. She said, "I have grown up watching Rupali ji's shows, and also had the opportunity to meet her almost nine years ago. We took a picture then and it was so nice to click with her again after so many years. As warm and cordial as she is, we had a great chat when I met her recently." Shivangi Joshi Is Excited About Her Double Role in ‘Yeh Rishta Kya Kehlata Hai’.

Rupali, too, couldn't stop herself from praising the young actress and said, "The bubbly, chirpy, vivacious Shivangi is a delight to meet. Her innocence, beauty and talent are a compelling mix that have made her a household name loved by all. She showed me this picture and we decided to recreate it as a then and now picture." What's more? If sources are to be believed Naira is going to welcome and introduce Anupamaa in a very special manner before the show premieres on Star Plus.

(The above story first appeared on LatestLY on Jul 12, 2020 04:02 PM IST. For more news and updates on politics, world, sports, entertainment and lifestyle, log on to our website latestly.com).