FRIENDS The Reunion: Director Reveals Why Paul Rudd, Cole Sprouse and Others Were Missing From the Special Episode

Did you miss Paul Rudd aka Mike and Cole Sprouse as Ben from FRIENDS Reunion special? Here's the reason why they were absent from the show. Read on. 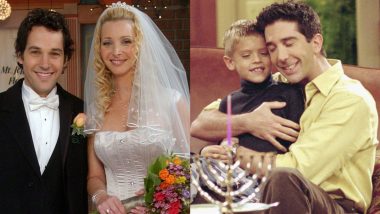 If you have yet not watched FRIENDS: The Reunion special episode, we will say, you are missing out on the best thing in the world right now. As the unscripted show was the right kind of dose one needed in these testing times. The sextet Jennifer Aniston, Courteney Cox, Lisa Kudrow, Matt LeBlanc, Matthew Perry, and David Schwimmer came under the same roof and made us cry some happy tears. Along with six besties, we also saw some amazing cameos on the show. However, even amid the many special appearances, fans missed the presence of actor Paul Rudd who played the role of Mike Hannigan (Phoebe’s husband) and Ben (Ross’s son), played by Cole Sprouse. Friends: From Paul Rudd to Cole Sprouse, 5 Actors From the Show Not On the Guest-List But We Still Want To See Them On Reunion Special Episode on HBO Max!

Now, the director of FRIENDS, Ben Winston shed some light on the absence of the popular characters from the reunion. He told The Wrap, “Well, we couldn’t have everybody on, because it’s only an hour and 45 minutes. And you’ve needed to concentrate — the most nub of the show possesses to be about the six cast members. So you can’t have too many cameos due to course, there have been many amazing people that were in Friends over the years. Sadly, we couldn’t get everybody in.” FRIENDS The Reunion: Fact Check! Jennifer Aniston Was Wrong About Ross and Rachel’s First Kiss in Central Perk – Here’s Why! (LatestLY Exclusive).

He further added how travel restrictions in COVID-19 times also stopped many to attend the reunion. “You know, we did invite some people that weren’t ready to make it. It’s a sophisticated time to be making television now because, you know, some people couldn’t fly internationally, some people were on other TV or film shoots, some people are in bubbles on stuff,” he said. FRIENDS the Reunion Review: Nostalgic, Heartbreaking, Touching and Somewhat Stretched, ‘The One Where It All Comes Back’! (LatestLY Exclusive).

FRIENDS: The Reunion special aired on ZEE5 in India on May 27. The episode was a walk down memory lane for all the sitcom fans. Reportedly, the show churned over 1 million views for ZEE5 in less than 7 hours, making a new record of sorts for the OTT platform. Stay tuned!

(The above story first appeared on LatestLY on May 28, 2021 03:46 PM IST. For more news and updates on politics, world, sports, entertainment and lifestyle, log on to our website latestly.com).