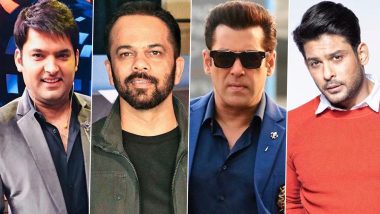 With the on-going lockdown in India getting extended, we all have resorted to sitting in front of the television or our desktops, subscribing to Netflix, Amazin Prime, Hotstar and what not to keep ourselves entertained. And in doing their bit, various channels have brought back their old television shows in a bid to entertain the audience. And Ormax Media, an organisation that has always kept track of the audience's viewing patterns has compiled a list of Top 5 non-fiction and fiction characters who have in the month of March alone, managed to keep the viewers entertained. Salman Khan Sends a Strong Message About Uniting Against Coronavirus With a Powerful Picture (Read Tweet).

It can also be concluded by saying that the top 5 in both, the fiction and non-fiction category belong to TRP topping shows on television. While The Kapil Sharma Show always maintains a place in the Top 10, Bigg Boss is undoubtedly a show that rakes in huge numbers and so do Ekta Kapoor's shows Kumkum Bhagya and Kundali Bhagya. Choti Sarrdaarni too has impressed with its tight storyline and Yeh Rishta Kya Kehlata Hai's episode numbers and the show's 11-year run speaks for itself.

(The above story first appeared on LatestLY on Apr 17, 2020 04:59 PM IST. For more news and updates on politics, world, sports, entertainment and lifestyle, log on to our website latestly.com).