Kuch Rang Pyar Ke Aise Bhi to Balika Vadhu, Top 5 TV Shows That Got Renewed for Another Season Due to Its Popularity

Television shows are often loved by all, but few have managed to maintain their popularity. However, some TV shows are continuing their hold on audience by coming back with two or three seasons or even more. 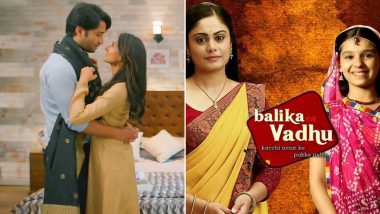 Television shows are often loved by all, but few have managed to maintain their popularity. However, some TV shows are continuing their hold on audience by coming back with two or three seasons or even more. Here is a list of top shows which have come back with more than one season to entertain their fans. Balika Vadhu Season 2: Colors TV Reveals the New Anandi Who’s All Set To Eliminate Child Marriage From the Society (Watch Promo).

The show started with its first season in February 2016 that ended in August 2017. It was followed by second season in September 2017. Now the show is back with its third season.

Produced by Yash and Mamta Patnaik, the show airs on Sony Entertainment Television.

The story revolves around a loving couple Dev and Sonakshi and their changing dynamics about relationship with time.

Its first season was aired on Star Plus in December 2009 with Pooja Gor and Arhaan Behl and ended in 2012. Now the show is running with season 2 on Star Bharat.

The show is produced by Director's Kut Production -Rajan Shahi along with Pearl Grey.

It is a complete family drama that revolves around the relationship of mother-in-law and daughter-in-law.

This show which began back in 2011, wrapped up in 2018. Now it is going on with second season on Colors TV.

It is a family drama which revolves around two sisters, Simar and Roli and their married life.

The first season ran from July 2008 to July 2016. And now it is coming up with second season from August 9 on Colors.

The story is about child marriage with different dimensions.

(The above story first appeared on LatestLY on Jul 29, 2021 12:27 PM IST. For more news and updates on politics, world, sports, entertainment and lifestyle, log on to our website latestly.com).